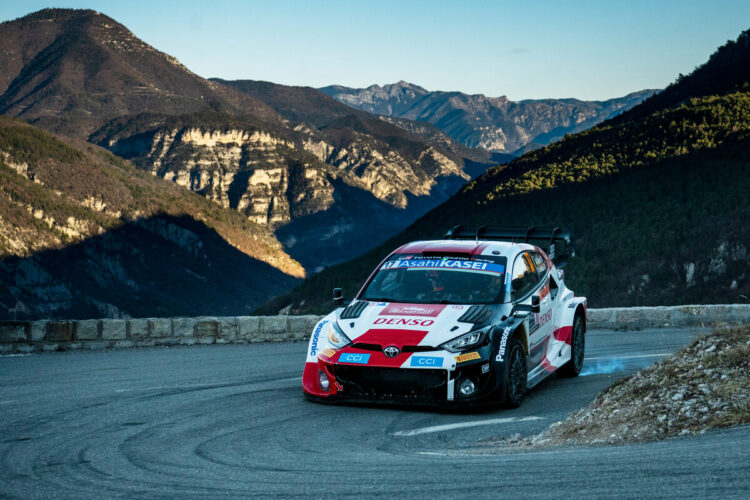 Sebastien Ogier finished Saturday with a 16s lead over his team-mate Kalle Rovanperä as the Rallye Monte Carlo heads into its final day. Hyundai’s Thierry Neuville currently sits in third 32s back from Ogier.

Ogier started the day with a sizeable lead that allowed the Frenchman to take a sensible approach to the stages. With this cautious approach, Ogier’s lead was cut by 6s during the morning loop as he minimised the risks that could cause a puncture.

“Since this morning, the target is to try to stay safe.” Ogier said “There are a lot of cuts with a high risk of punctures, so I took it easy.

The crews behind started to work on closing the gap to the lead Toyota with Rovanperä claiming a stage win as he also gapped the Hyundai of Neuville. Toyota had a stranglehold on the top of the timesheets as up until the mid-point, no other manufacturer had taken a stage win, but Neuville went and won SS12 and SS13 to keep the pressure on.

When it came to the final stage of the day though, Rovanperä produced a stunning drive that cleared everyone else by 6s. This left Ogier with a 16s lead to try to hold onto going into the final day.

Elfyn Evans was continuing his recovery from an early puncture the day before and moved into fourth as Ford driver Ott Tänak suffered with an intermittent power-steering problem throughout the day. Tänak held onto fifth but found himself 40s down on Evans and 1min 37.s down on Ogier.

Takamoto Katsuta finished the day in sixth, however due to the gaps in front and behind, the Japanese driver is on his own with no real battle going on. Dani Sordo once again had a day to forget but whereas on Friday he was confused, Saturday saw just an outright unhappy Spaniard due to fighting Hybrid issues.

Esapekka Lappi follows Sordo by only 2.6s after suffering a puncture, but the incident goes to Pierre-Louis Loubet. After what has been a rally to forget, after his heroics the previous day, Loubet ended up hitting a bank and damaged his Puma. This meant that he had to retire from the day as no substantial repair could be completed.