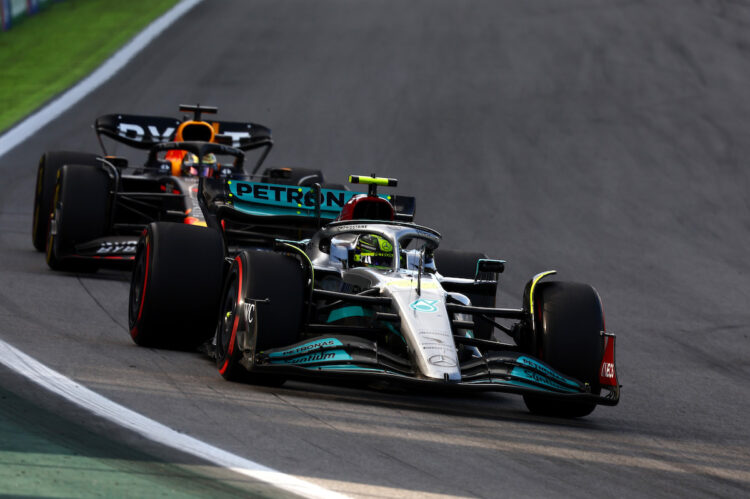 The 2022 Sao Paulo Grand Prix weekend was unpredictable and exciting, with a number of talking points stemming from the chaotic weekend.

Max Verstappen was at the centre of the controversies that unfolded at the Interlagos Circuit, as he found himself under scrutiny at the start and conclusion of Sunday’s race.

Verstappen has almost always done things his way. It’s a mindset and a style that has contributed to his success in F1, but in Sao Paulo, it proved to be his downfall.

The team order debacle that played out at the end of the grand prix was wild. The matter is only speculation for the time being, but rumours floating around suggest that it was a payback scenario following Sergio Perez’s crash during Q3 at Monaco earlier this year.

Before the bizarre intra-team squabble, Verstappen was in the wars with old foe Lewis Hamilton. At a Safety Car restart on lap seven, Verstappen attempted to promote himself from third to second, placing his car around the outside of Hamilton’s at Turn 1, which then changed to the inside for Turn 2.

Contact was made, and Verstappen was ultimately deemed at fault by the stewards, who handed the Dutchman a five-second time penalty and two penalty points on his licence.

Verstappen and Hamilton are no strangers to each other on the circuit, and the 2021 campaign saw both tangle on numerous occasions – enough to provide them with the knowledge of how they should expect to be treated by the other in each in wheel-to-wheel combat.

It very much appears that the two anticipated they were going to come together before the incident unfolded.

“What can I say, you know how it is with Max,” Hamilton said after Sunday’s race.

“I went around the outside and I knew he was not going to leave space,” Verstappen stated.

A key difference this year is the battle in Brazil was simply for position, rather than the outright title. There was more to lose and a lot more to prove in 2021 – but the season ended sourly and only deepened the animosity between the pair.

The Verstappen that was on display in Brazil was akin to the driver that was heavily criticised in the early part of his Red Bull F1 career – a fast but aggressive, often unreliable character.

Following his championship success, the Dutchman gave off the impression that he would be much more relaxed inside the car, having achieved his team of claiming a title in F1.

It seemed the case as in the early part of the season, prior to the dominant stretch that took him to a second championship, he was respectful and tasteful when fighting with Charles Leclerc.

But whether you are of the opinion that Verstappen should’ve backed off or Hamilton could’ve provided more space in Sao Paulo, Verstappen’s on-track decision did not mirror his early-season demeanour. In that moment, he accepted he would come together with Hamilton, and rather than back out to return to the battle later, he kept his car alongside to prove a point.

Similarly, it seems, did Hamilton.

Both are highly regarded as the best in F1 at the current moment, and with the two not having much chance to fight each other in 2022, perhaps there was an itch to scratch from both ends.

Their 2021 rivalry was one of the most intense conflicts F1 has seen for some time, and almost 12 months on, the ill feelings have not dissipated.

“I don’t have any concerns [over Verstappen], I think,” Hamilton reflected. “I think it’s natural when you have the success and the numbers on your chest, that you become a bit of a target. But it’s OK. It’s nothing that I have not dealt with before.”

Nothing will change the outcome of the 2021 title fight, or the titanic journey that brought them to the controversial Abu Dhabi finale.

Brazil was evidence that the rivalry is very much still alive – one that has the potential to boil over once again if the circumstances allow it.