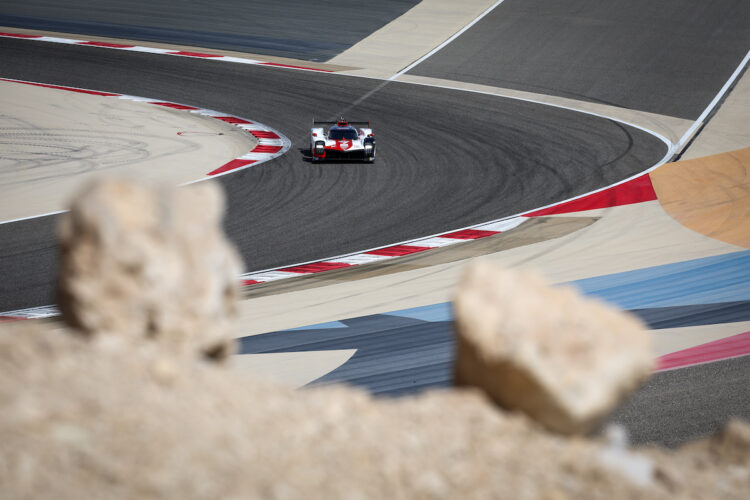 2 hours in, Toyota leads the FIA World Endurance Championship’s 8 Hours of Bahrain 1-2, but Peugeot isn’t far behind, although the latter does seem to be having reliability issues.

Sebastien Buemi, driving the #8 Toyota GR010, is around 5 seconds ahead of his teammate Mike Conway in the sister #7 Toyota GR010. Until a few minutes ago, Paul di Resta was a further 18 seconds behind in the #93 Peugeot 9X8, and ran second close behind Buemi until the French squad were jumped by Conway in the first round of pitstops.

However, the Scot had been complaining of slow gearshifts for much of the race, and the car stopped at the turn 1-2 complex just a few minutes ago as of the publishing of this article, with di Resta complaining that the gearbox “has completely broken”.

Race direction neutralised the race but di Resta has managed to get the car going, and has got the car back to the pits, where the team pushed it intio the garage.

The sister #94 Peugeot 9X8, steered by Gustavo Menezes over the first two hours and now with Peugeot debutant Nico Muller at the wheel, was a further five seconds off di Resta, but now sits third with di Resta fifth. However, Muller has stopped on track under FCY, with the team instructing the Swiss to power cycle the car. He did eventually get it going but this will be a worry for the French team.

Fourth in class is the #36 Alpine A480, currently with Matthieu Vaxiviere behind the wheel, 44 seconds off the lead and struggling with straight line speed, and, therefore, traffic management. As already managed, di Resta is fifth.

This would hand the drivers’ championship to the #8 Toyota crew of Buemi, Ryo Hirakawa and Brendon Hartley.

Hanson’s teammate Filipe Albuquerque took the lead at the starty of the race, from the polesitting #41 RealTeam by WRT Oreca 07-Gibson of Ferdinand Habsburg, and so far has not looked back.

James Calado in the #51 Ferrari 488 GTE EVO leads GTE-Pro, with a lead of over 30 seconds from the #64 Corvette C8.R of Tommy Milner. Both got lucky in the second hour of the race, with a full course yellow for debris on track handing both cars a free scheduled pitstop.

Before this, the currently-third #52 Ferrari 488 GTE EVO of Antonio Fuoco, and both Porsche 911 RSR-19s, #92 of Kevin Estre in fourth and #91 of Gianmaria Bruni, were in a tight battle with Calado, with some excellent racing between all four cars from both manufacturers.