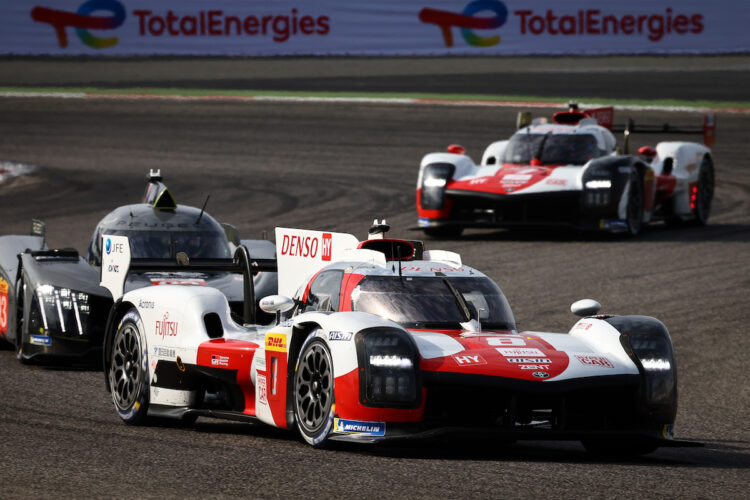 Mike Conway, Kamui Kobayashi and Jose Maria Lopez have won the 8 Hours of Bahrain in the #7 Toyota GR010, with their teammates in the #8 Toyota GR010 finishing second and, therefore, taking the drivers’ world championship.

Sebastien Buemi, Ryo Hirakawa and Brendon Hartley needed to finish ahead of their championship challengers in the #36 Alpine to win the championship. In the end, Matthieu Vaxiviere, Nicolas Lapierre, and Andre Negrao could only manage third, three laps behind the winning Toyota.

Buemi led the race from pole early on, but team orders a few hours into the race saw the lead swap to the #7 as Conway was faster than Hartley, who was in the #8 Toyota at the time. The #7 Toyota crew subsequently pulled away, finishing the race with an almost 50 second gap.

With the #36 Alpine third, the #94 Peugeot of Nico Muller, Gustavo Menezes and Loic Duval finished fourth, six laps off Kobayashi. The other Peugeot, #93, driven by Jean-Eric Vergne, Paul di Resta and Mikkel Jensen, failed to finish after technical gremlins hit the car with a couple of hours to go.

Peugeot promised much early on, with di Resta keeping up with the leading #8 Toyota in the first hour. However, the Scot then had to stop the car on track at the turn 1-2 complex. He got it going and back to the pits, where it briefly spent time in the garage.

At the same time, Muller had to stop the #94 on track. The Swiss power cycled it and, like di Resta, got it going. While both ran without problems for a while, the #93 eventually retired as a result of its problems, with the #94 finishing fourth.

In LMP2, #31 WRT Oreca 07-Gibson won, with Robin Frijns, Rene Rast and Sean Gelael at the wheel. The car started eighth in class, climbing up the order through the race to take the win by 50 seconds over the #23 United Autosports Oreca 07-Gibson of Oliver Jarvis, Joshua Pierson, and Alex Lynn.

Third in class was the #38 Jota Oreca 07-Gibson of Antonio Felix da Costa, Will Stevens and Roberto Gonzalez, which subsequently wins the LMP2 drivers’ championship.

GTE-Pro was, as ever, a hectic race with a nailbiting finish. While the #52 Ferrari 488 GTE EVO of Antonio Fuoco and Miguel Molina won the race, Michael Christiansen and Kevin Estre in the  #92 Porsche 911 RSR-19 could only finish third, meaning the #51 Ferrari 488 GTE EVO, driven by James Calado and Alessandro Pier Guidi won the championship.

Calado and Pier Guidi led the race for a substantial amount of time and looked odds-on to take the title. However, with a couple of hours to go, the gearbox began to break down, with horrible grinding noises coming from the car. However, Pier Guidi managed to bring the car home — albeit eight seconds or so a lap off the pace — meaning he and Calado took enough points to take the championship.

The #64 Corvette C8.R of Nick Tandy and Tommy Milner finished second, after a lucky free pit stop during a well-timed full course yellow put them into contention after falling back in the first hour.

The #91 Porsche 911 RSR-19 of Gianmaria Bruni and Richard Lietz finished fourth, with the championship-winning #51 Ferrari in fifth.

Sarah Bovy, Rahal Frey, and Michelle Gatting in the #85 Iron Dames Ferrari 488 GTE EVO finished third, after leading much of the race, but couldn’t hold off the Team Project 1 Porsches late on.