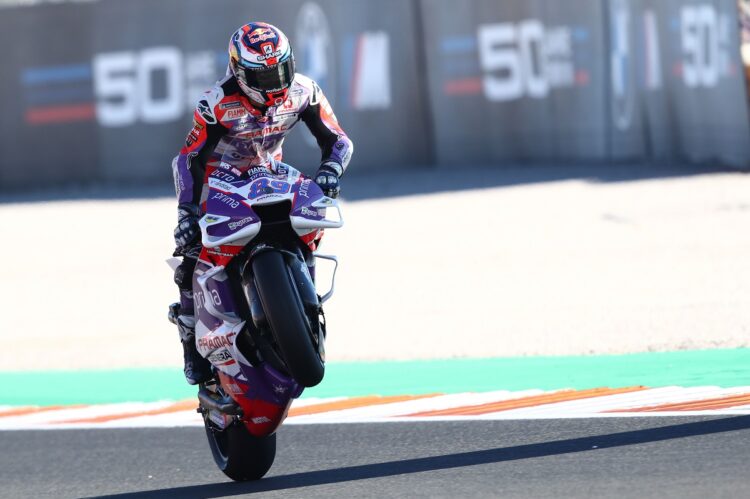 Jorge Martin flew to a fifth MotoGP pole of 2022 in Valencia ahead of Marc Marquez, while Fabio Quartararo got the better of title rival Francesco Bagnaia.

The Pramac rider came out swinging from the very start of the pole shootout as he immediately fired in the fastest lap of the weekend, a 1:29.621s to head the factory Ducati of Jack Miller.

Conditions looked to be far from straightforward out on track though as the bulk of the field struggled to find improvement in the final minutes of the test, with Martin’s best effort coming just over a tenth-of-a-second short of his own benchmark.

Luckily for him his closest rivals failed to capitalise with Miller crashing at Turn 2 just before beginning his final gambit, while team-mate Johann Zarco also crashed late on.

This left Martin to collect a fifth pole of the year – as well as his third in a row – ahead of Marquez, who impressively managed to wrestle his Honda to the middle of the front row – his closest fellow RC213-V rider being Alex Marquez down in 15th.

Miller’s earlier time was enough to keep him third ahead of title contender Quartararo, though the Frenchman certainly has his work cut out to try and score the victory he needs to have any hope of stealing away the championship from Bagnaia at the death.

Alex Rins was a strong fifth for Suzuki to give himself a good shot at a podium push in what will be the Japanese manufacturer’s final MotoGP encounter for the foreseeable future, the Spaniard heading countryman Maverick Vinales on his Aprilia having joined him in progressing from Q1.

Brad Binder was seventh for KTM ahead of Bagnaia, who only needs to finish 14th or better on Sunday even if Quartararo were to win to secure a maiden riders title – Ducati’s first since Casey Stoner’s triumph in 2007.

Zarco slipped to ninth in the end ahead of the second Aprilia of Aleix Espargaro, while the VR46 Ducati of Luca Marini and the sister Suzuki GSX-RR of Joan Mir completed the 12 Q2 contenders.

Enea Bastianini narrowly missed out on a chance of fighting in the pole shootout after crashing in the closing seconds of Q1, the Gresini man forced to make do with 13th on the grid for the Valencia Grand Prix ahead of KTM’s Miguel Oliveira, who failed to build on a scratch time in the preceding FP4 outing.

Franco Morbidelli could manage only 16th on the grid on the other factory Yamaha just ahead of Cal Crutchlow’s RNF Racing-prepared example, while Marco Bezzecchi’s tough weekend continued following several crashes through practice en-route to 18th – albeit still the highest-placed rookie ahead of Fabio Di Gianantonio.

Remy Gardner will line up 20th for his final MotoGP contest for the foreseeable future, the Aussie three spots ahead of Tech 3 KTM team-mate Raul Fernandez – with Darryn Binder completing the field for what will be his last premier class start as he moves to Moto2 for 2023. 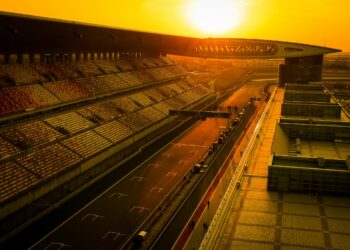