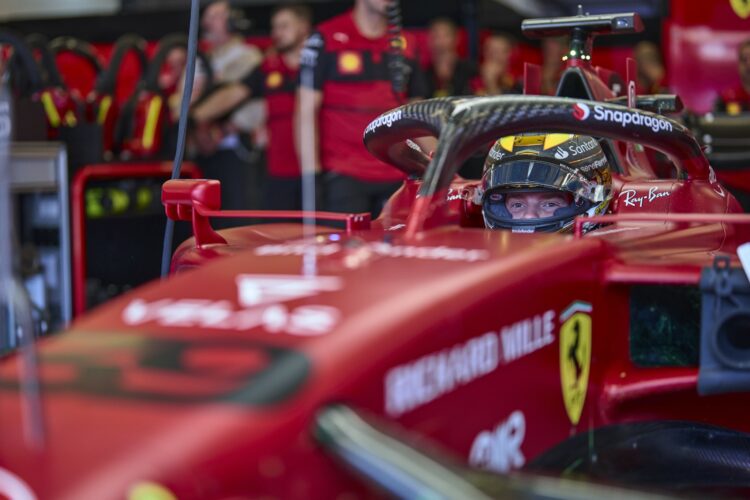 Ferrari test driver Robert Shwartzman has conceded that his Formula 1 race ambitions are likely over after missing out on a seat for another season.

Shwartzman was among Ferrari’s leading junior prospects, claiming the 2019 FIA Formula 3 title, and finished fourth in his rookie Formula 2 campaign, before placing runner-up to team-mate Oscar Piastri in 2021.

Of the 2020 crop champion Mick Schumacher, Yuki Tsunoda and Nikita Mazepin stepped up to Formula 1 while from the 2021 group Zhou Guanyu debuted this year, and champion Piastri will belatedly graduate with McLaren in 2023.

Shwartzman instead took up a role with Ferrari as its official test driver and was tasked with undertaking extensive simulator duties. He was nominated as its young driver, participating in FP1 in Austin and will partake in the corresponding session in Abu Dhabi.

Off-track Shwartzman also switched his racing license to Israel, the country of his birth, and has spent much of the year in Italy, to where he moved as a child.

“Honestly it was a tough year,” Shwartzman tells MotorsportWeek.com. “Unfortunately, I didn’t race, which for any racing driver is a big thing. What will happen [in the future], I don’t know yet, but it’s super hard and challenging to get into Formula 1.

“I always pushed and worked really hard, it didn’t matter what was going around with the dream or target to get to Formula 1. Will it happen or not happen? At this stage I don’t know. I can guess maybe not. And that’s obviously very sad for me because it has been such a big work and I kept on pushing and believing and at the end still it doesn’t happen for various reasons.

Shwartzman accepts that “the thing I could have done a bit better is bring the results those years [in 2020 and 2021], and that would probably give me a bigger help to get into F1” but stresses there’s “still no guarantee I’d be there.”

There is also an aspect of disillusionment with the structure of the driver market.

“I mean, F1 is a bit weird to be honest these days, for me at least,” he says. “I don’t really understand it, the line-up and the driver decisions teams do, I don’t get it from my side.

“I don’t want to put names, but for me unfortunately it doesn’t always go by the merit.

“Oscar had to wait a year and it was a bit messy for him. I put myself in it as well, I pushed him hard, did hard work, and I know if I would have a chance, I’d show I’m capable. It is what it is at this stage, it’s the situation where I can’t do anything about it even though I’d love to and make it more fair.

When pressed on why he feels that way, Shwartzman replies: “Well I can’t go up to a team and say ‘take me because I really deserve it and would bring the results’, I can’t do that because… I can say it, prove it and show it on [eventual] results, but the decision-making thing is not going to be on me. So looking at how it is now it’s maybe not the main priority for them.”

The status of 2019 F2 champion Nyck de Vries is raised, with the Dutchman sealing a 2023 AlphaTauri seat hugely facilitated by his substitute appearance with Williams at Monza. But Shwartzman isn’t keen on such a strategy and wants to get back behind the wheel, somewhere, in 2023.

“Honestly for Nyck it happened after three years, he raced, and honestly I respect Nyck and think he’s talented and good but the stars aligned perfectly for him and he did a good job of taking that opportunity – he got one shot and he took it,” Shwartzman explains. “Will I? Who knows. To wait and sit here and waste time not racing just hoping for a miracle to happen… I would not really see it quite logical for me, and anyway after doing this work I really want to race next year, as I miss racing.

“If you don’t race you miss that spirit of [being] a race driver: to fight, to win, and push yourself. Imagine if I don’t race; I will wait, wait, wait and if I have the opportunity I would not be ready for it as I had not raced [since 2021]. So for me the main priority next year is to go race. Where? I don’t know, we are looking at options and what we have on the table for the best offer possible and we’ll see.”

Shwartzman is nonetheless hopeful that the recent setbacks will stand him in stronger stead for 2023 and beyond.

“There’s positives to take, as I matured more, I learned more, I know how to handle myself better with the engineers, how to work with them better, so anyway for my career – it doesn’t matter where I will be – it was an important phase in my life,” he reflects.

“We did a few tests with the old car, I did the FP1 first time in Austin, the first time in the car so it was very interesting, and very cool. We’ll have another one in Abu Dhabi, that’s it, not much driving unfortunately but it is what it is.”