Can Mercedes catch Ferrari for second in the Constructors’ Championship? 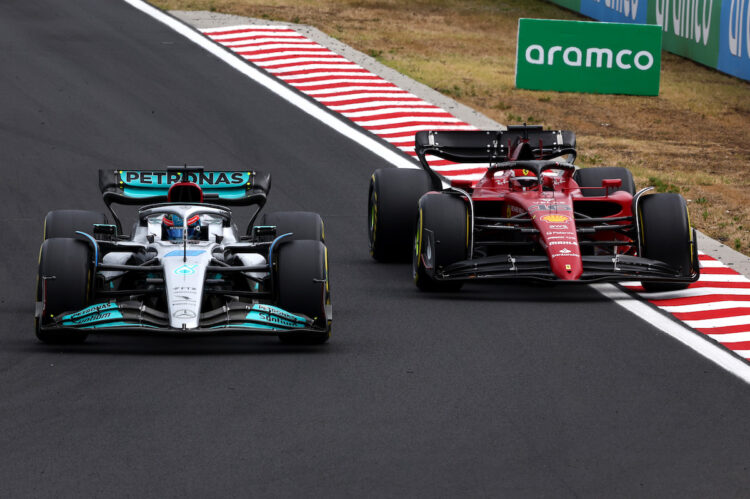 Ferrari endured one of its weakest performances of the 2022 Formula 1 season on Sunday in Mexico, as it couldn’t even sniff a potential podium finish at the Autodromo Hermanos Rodriquez.

The weak performance once again raised questions about its potential to hold onto second place in the Constructors’ Championship, as Mercedes, whose performance has been lacklustre for much of the year, still breaths down the neck of the Maranello-based outfit.

Entering the year, Ferrari had arguably the fastest car in the field, taking victory at two of the opening three races. But since then, its pace has been trending downward, and it quickly lost sight of Red Bull in the title fight.

Mercedes on the other hand, has consistently been improving its form. Podiums in the opening stages of the campaign were far from a guarantee, as it took three third-place finishes in the first seven races. But in the following 13 grands prix, it has been present on the podium on 10 occasions.

Although it is yet to take a race victory this year, it came close in the USA, and showed strong race pace last time out in Mexico with tyre strategy being its biggest hindrance.

The thought that Mercedes would finish ahead of Ferrari was almost inconceivable at the start of the year, but with two rounds remaining in the 2022 campaign, there exists an opportunity for it to jump up one spot in the standings.

40 points separate the two parties, but there are still 103 points up for grabs in the Constructors’ Championship. Ferrari’s strategy errors, unreliability and on-track mistakes have hurt it, as it probably should possess a more sizeable lead over Mercedes at this current stage.

Ferrari halted the development of its 2022 car earlier than Mercedes, as it switched its focus to 2023 once it realised that championship success wouldn’t greet it this year.

Mercedes brought its final upgrade of the year to Austin, Texas earlier this month as it continues to pull itself back from the difficulties it endured at the start of the year.

“Mercedes is coming back,” recognises Ferrari team boss Mattia Binotto. “They have developed the car more than we did. We know as well, ourselves, that we stopped quite early the development of our car, focusing on 2023. Somehow, I’m not too concerned by the rate of development because I know as well when we stopped developing it.”

Ferrari doesn’t expect that its performance in Brazil and Abu Dhabi will be as poor as it was in Mexico, when it finished over half a minute down on race-winner Max Verstappen.

But that doesn’t stop it from looking over its shoulder at Mercedes, who has never stopped being a threat this year despite having more limitations with its car.

Mercedes finishing second would be even more astonishing if it did so without winning a grand prix – with 20 races ticked off, it is still yet to stand on the top step of the podium, with its last victory coming at the 2021 Saudi Arabian Grand Prix.

The team’s eagerness to return to the front of the grid shone through in Mexico, as when asked if he would rather see Mercedes take a win at the final two races or beat Ferrari to second, team boss Toto Wolff replied: “A win.

“The win would be proof that our car is back to fight for wins,” he added. “P2 could also be that others dropped the ball and you’re just scoring more points.”

Overthrowing a 40-point deficit in two rounds is a difficult task, but the efficiency of Mercedes in 2022, amid all its woes, means that it can’t be counted out – especially after coming off the back of the most dominant stretch the sport has ever seen from a single constructor.

And although it would be a magnificent achievement, gaining on Ferrari is not its priority.

“It would definitely be some consolation,” Wolff said, referring to finishing second in the standings. “Ferrari had the quickest car at the beginning of the season.

“Finishing ahead of them would be great, but again it’s not our main priority. The main priority is understanding the car and having a quick automobile on the track.”