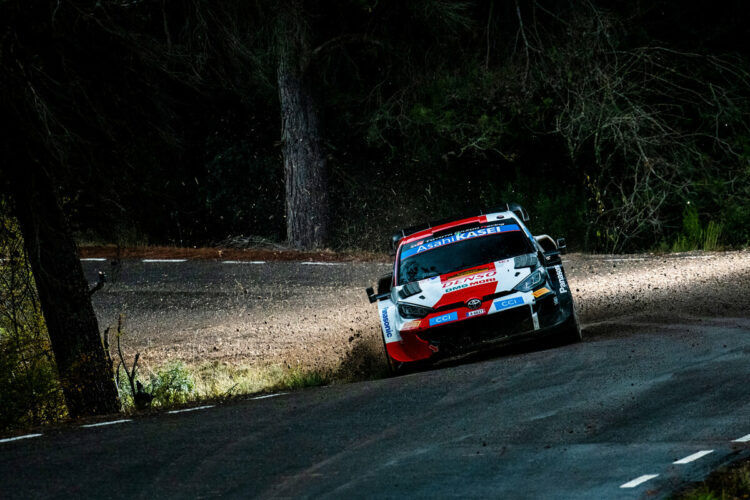 Sebastien Ogier has ended the opening day in Spain with a 4.8s gap to recently crowned champion Kalle Rovanpera whilst Thierry Neuville rounded out the top three 12.5s from the Frenchman.

Initially it was Toyota on top over the first three stages with Rovanpera taking two stage wins and Ogier taking one, however there was a Hyundai in the mix that pounced as the drivers completed the morning loop. Thierry Neuville took a string of second places before taking the rally lead after the final morning stage albeit by a slender margin.

Ogier immediately responded after the break by winning the opening afternoon stage, outpacing Neuville by 3.7s. Rovanpera kept within reach of the top two as well only 6.5s back from Ogier at this point and then made it count if the following stage by jumping their Hyundai rival to move into second. The top three didn’t change thereafter and finished with two Toyotas followed by a Hyundai.

Toyota’s aim to win the manufacturers’ title may have to wait however as fourth and fifth were claimed by Ott Tanak and Dani Sordo, making it a Hyundai 3-4-5. Tanak didn’t have a particularly smooth day, the Estonian had to tackle hybrid unit issues as well as making repairs due to an alternator fault.

Dani Sordo claimed fifth due to a front left puncture for Welshman, Elfyn Evans. Despite also suffering the same problem on SS7, the home favourite picked it up only a few kilometres from the finish so was able to maintain a better pace.

“I think there’s something in the cut, luckily, it was only a few kilometres before the end. Obviously we lost time but it could have been worse.”

Elfyn Evans more severe puncture meant that he ended the day in sixth place. He wasn’t the only Toyota man to suffer from the exact same issue as Takamoto Katsuta also hit the rock that Evans and Sordo hit which meant he ended the day in eighth. Katsuta is part of the Toyota sandwich with Ford’s Craig Breen acting as the filling but returning Frenchman, Adrian Fourmaux, is only just 2.7s off the Japanese driver.