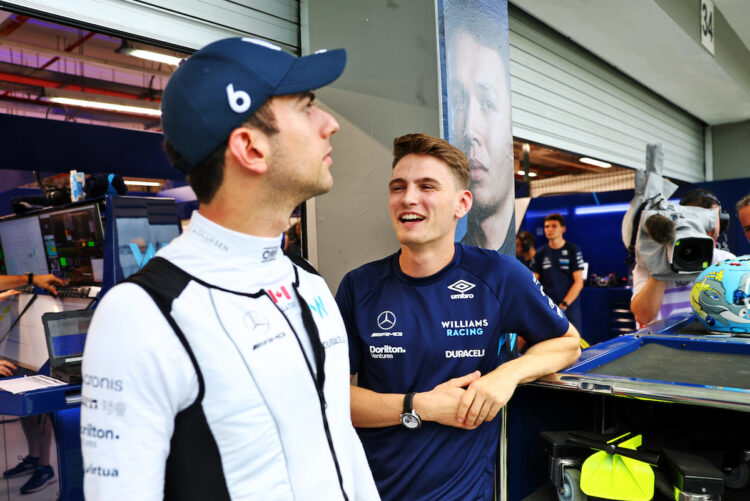 The long loiter for another American Formula 1 driver could soon be over, as Logan Sargeant bids to become the first US driver since 2015 to race in F1.

The 21-year-old will make his weekend debut in Austin on Friday, as he climbs behind the wheel of the Williams FW44 to contest the opening practice session of the US Grand Prix.

Sargeant has been associated with Williams for almost a year, and now has a prime opportunity to race full-time in the sport next season after the team announced that it would part ways with Nicholas Latifi at the end of 2022.

Sargeant appeared to be contending against Nyck de Vries for the seat, and following the Dutchman’s impressive outing at Monza, it looked obvious that de Vries would get the nod over Sargeant.

But AlphaTauri came knocking for de Vries, and slotted him into its 2023 line-up – leaving Sargeant as the leading contender for the vacancy at Williams.

De Vries’ signing is a blessing for Sargeant – of late, his F2 form hasn’t been fantastic, as he has retired from five of the last nine races. However, he remains third in the standings, which would be enough to grant him an F1 Super Licence at the end of the year.

His mid-season results accelerated his claim to an F1 seat, as he had a strong run across the rounds in Baku, Silverstone and the Red Bull Ring. It may well be those classifications that decide his 2023 fate, if no last minute suitors arrive on the scene to contest against him.

But crucially adding to his application will be the FP1 outing at the Circuit of the Americas this weekend, which may well be the truest test yet for him as he looks to secure his spot on next year’s F1 grid.

Williams will already know well how he communicates with the team and how he is embedded in its garage, but providing technical feedback in a 2022 F1 car will be an all-new challenge for him, and one that could prove vital to determining his future plans.

Adding on top of that the pressure to give the team a representative session with on-track data in front of his home crowd, the outing will be far from simple.

There should be hope amongst the team that Sargeant will have a strong session and pledge his case for next year’s seat. F1 junior academies have proven to be an important part of the modern-day driver progression, with Red Bull, Mercedes and Ferrari all making use of their own programmes.

It would be a fantastic signal of intent for Williams to promote one of their own, despite competing off the pace of other teams who possess driver academies. It shows impressive development and a real intent to utilise its F1 set-up to better both itself and the career of a young driver.

There is also hope that Sargeant’s potential promotion isn’t simply the product of F1 booming in the United States. Red Bull’s eagerness to send Colton Herta to AlphaTauri in 2023 is an example of just how marketable a US-born driver is, especially with three races in the country scheduled for next year.

But Sargeant has talent – and this Friday is a prime opportunity to truly prove that he is ready for the next step.