Marquez: ‘I enjoyed a lot, especially because it felt short’ 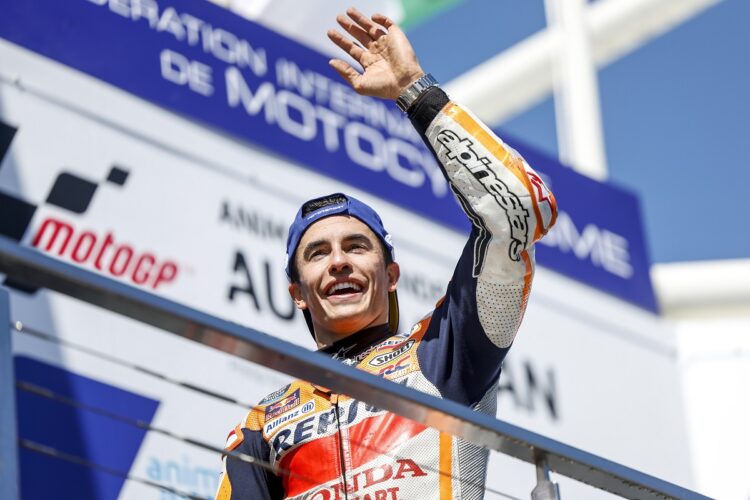 A thrilled Marc Marquez says he really “enjoyed” scrapping for the victory in the Australian Grand Prix, admitting the outing “felt short” as a result.

The six-time premier class champion scored his first rostrum result of 2022 at Phillip Island after taking the chequered flag in second just 0.186s behind the race winning Suzuki of Alex Rins after an emphatic tussle for supremacy, the first occasion he has enjoyed such a battle in dry conditions for some time.

Marquez gauged his enjoyment of the encounter by describing it as feeling “short”, the Spaniard relishing the chance to once again fight for wins after a tough year in which he was forced to undergo further surgery on the injured right arm he has suffered with since crashing at Jerez over two years ago.

Marquez reckoned he lacked just a touch of straight-line performance to seriously challenge Rins for the victory in the end, admitting the Suzuki pilot “defended in a good way” that prevented him from getting a realistic opportunity to overtake.

“It was a great race and I enjoyed it a lot, especially because it felt short,” said Marquez.

“When the race that short it means you’ve enjoyed it a lot, it’s been a long while since I was last fighting in the top group.

It’s true that I was there in wet conditions but in the dry I was there trying to manage the soft rear tyre, and at one point of the race I lost many position but I was able to come back.

“It was tough to overtake because our weak point was the straight and stopping in a straight line at Turn 4, but we did it.

“I tried to find the corner to overtake the riders and that ended up being Turn 2, the bike was turning well and in the last lap I tried with (Alex) Rins but he defended in a good way so when I saw he was defending well, you cannot forget where you came from.

“He (Rins) was not faster than me, but when a rider defends well and does a perfect lap it is very difficult to pass and sometimes you must accept (you are beaten), I could have tried at Turn 10 but if you try like that Pecco would have won the race because it would have been impossible to turn well enough.”

Marquez added that his strong Australian run was “so important” for his mindset having purely focussed on improving his physical condition since returning to competition at Aragon in last month, the 59-time premier class race winner keen to ascertain that “the speed was there inside me.”

“For me it was so important after coming back from the injury the test in Misano and then the races in Japan and Thailand, mainly because it was important to know that the speed was there inside me, and when I feel OK the speed is there,” continued Marquez.

“We need to work hard and the body needs to follow the speed, we are coming better and better, though it is true here is mainly a left circuit which helps a lot, there are only two right corners where you have to push hard so in Malaysia we will struggle more.

“This was the best way to keep the motivation and momentum for me, the team and Honda because they are not in a great situation, they are working hard and things are getting better.”