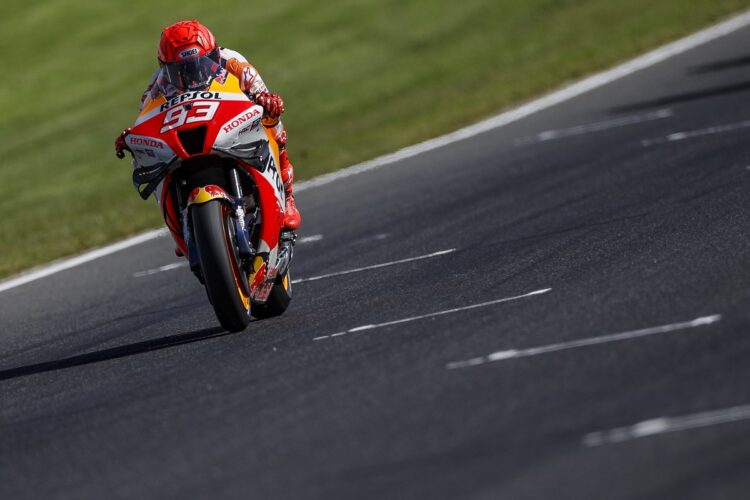 Marc Marquez fired to the head of the timesheets in FP3 to lead the way into qualifying at Phillip Island, while Fabio Quartararo narrowly escaped Q1 contention in tenth overall.

The session remained quiet for the majority of the scheduled 45-minutes, with Miguel Oliveria setting the early pace for KTM with a 1:29.658s effort that was later edged by Quartararo.

It would be Joan Mir that got the ball rolling on what would turn out to be an intense final flurry of qualifying simulation laps as the field battled for spots in the pole shootout, the Suzuki man banging in the fastest lap of the weekend with a 1:29.353s.

His time would soon be obliterated by a flying Jorge Martin though, the Pramac Ducati man managing a 1:28.616s to beat Johann Zarco’s FP2 benchmark by nearly a second.

The Spaniard was soon displaced though by VR46 Ducati’s Luca Marini, with Marquez taking his turn to head the timesheets shortly afterwards – the six-time premier class world champions 1:28.462s gambit ultimately securing him FP3 honours ahead of Marini.

Martin would therefore have to make do with third ahead of Aprilia’s Aleix Espargaro, while the sister VR46 entry of Marco Bezzecchi completed the top five.

Home hero Jack Miller bounced back from a rough FP2 outing to claim the sixth best time ahead of an impressive Alex Marquez’s LCR Honda, the 2018 Moto2 world champion enjoying a handy slipstream from Quartararo to bag seventh.

Francesco Bagnaia looked to lack the ultimate pace of the frontrunners en-route to eighth ahead of the second Aprilia of Maverick Vinales, while a late improvement from Quartararo just saw him snatch away the final Q2 spot in tenth from Zarco by a slender 0.045s – the latter forced to contest Q1 despite dominating proceedings on Friday.

Also missing out were both Suzuki’s despite showing strong form all weekend, Mir managing 12th while Alex Rins ended up all the way down in 17th on the sister GSX-RR.

Also flattering to deceive was Gresini’s Enea Bastianini in 14th, while Pol Espargaro – who ended Friday in third overall – could nab only the 15th best time.

It was a tough morning for KTM too, with Oliveira ending as the highest-placed RC16 in 16th – albeit only 0.671s away from the ultimate pace – while Raul Fernandez managed to shade a struggling Brad Binder on his Tech 3-run machine for 19th.