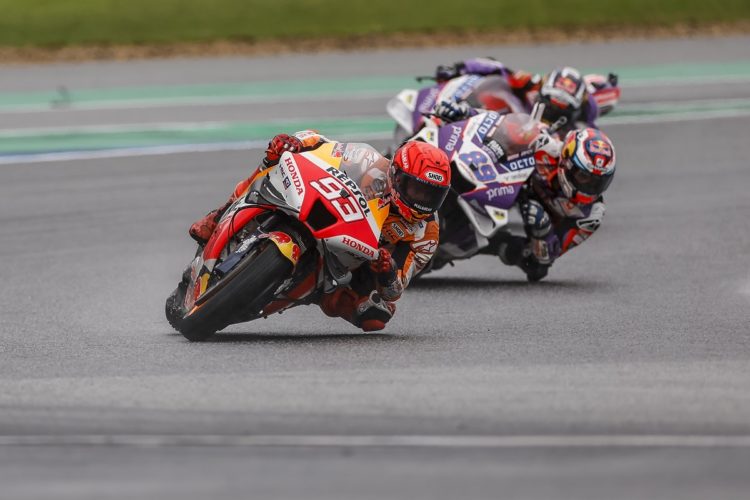 Marc Marquez felt his chances of fighting for a podium finish in the Thailand Grand Prix were stunted due to the acceleration of Ducati’s Desmosedici being in “another world.”

The Honda racer challenged within the top six at the Chang International Circuit across the entirety of the 25-lap encounter, Marquez taking things easy early on before his confidence improved as the track started to dry across the second half of the race.

Having passed pole-man Marco Bezzecchi for fourth less than half-a-dozen laps into the event, Marquez later closed down third-placed Francesco Bagnaia though found himself unable to mount a serious attack for the final spot on the rostrum – the six-time premier class world champion ultimately losing fourth to a charging Johann Zarco in the closing stages.

Marquez was left satisfied over his own performance after scoring a second-straight top five since returning to competition at Aragon last month, though rued that it was “impossible to overtake” Bagnaia’s Desmosedici due to the acceleration on the Italian’s machine being “in another world.”

“I’m happy, overall the race was good and we did another solid race,” said Marquez.

“I didn’t try to do anything amazing or make any mistakes at the beginning I was just very calm, mainly just to try and warm-up the tyres because these wet races can be very long.

“I started to feel better and better and tried to go in front, but then when I arrived behind Pecco (Bagnaia) it was impossible to overtake.

“He was braking late and hard, but he was especially strong on acceleration because the Ducati is in another world.

“We are working on it and trying to do better and better, so another race we finished and we had a great weekend in the dry, so we’ll keep improving.

“We had different conditions during the race, at the beginning there was a lot of water which then became less and less before there was a dry line at the end in some parts of the circuit.

“From the middle to the end I felt strong but the last laps behind the Ducati it was so difficult to pass, with Pecco I arrived too late in the braking points because I lost so much on acceleration, and he was defending in a good way.

“Then (Johann) Zarco overtook me and I decided to stay there, I tried to be close just to see if he tried to overtake Pecco but I think being Ducati vs Ducati, they have a special respect.”