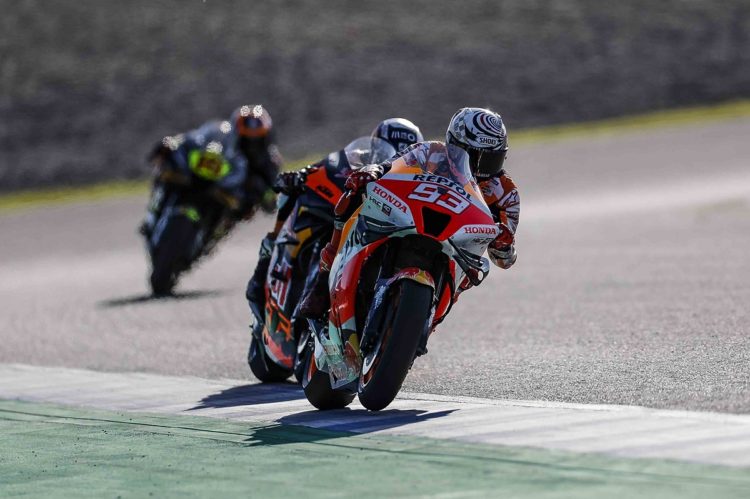 Marc Marquez led out the blocks early at the Buriram International Circuit in the opening practice test for the Thailand Grand Prix, which turned out to be dry.

Extensive levels of rain were expected to affect running across the entirety of the event, though it held off until at least FP2 – giving the riders their first dry running at the venue since the last visit to the country back in 2019.

A rain shower earlier in the day meant the track wasn’t in fully-optimal condition at the start of the test, with Maverick Vinales sitting atop the timesheets early on with a 1:32.098s on his Aprilia – though the times would swiftly begin to fall.

Johann Zarco had moved himself to the head of the field on a 1:31.504s effort by the time the field eventually switched to soft-compound rubber for a late time attack, with the session potentially crucial in deciding the top ten that would progress directly to the pole shootout should rain affect the remainder of the weekend.

Fabio Di Gianantonio was the first to find significant improvement with new rubber as he headed skywards on the timing pylon before being quickly displaced by both Jorge Martin’s Pramac Ducati and series leader Fabio Quartararo.

It would be Marquez though who managed to get the best from his tyres as he fired in a 1:30.523s at the death to ultimately secure FP1 honours ahead of the Frenchman – despite crashing at Turn 3 early on after running wide onto the still slippy blue paint on the outside of the bend – with Japanese GP victor Jack Miller lifting himself up to third.

Luca Marini was fourth overall for the VR46 Ducati squad, while Alex Rins completed the top five for Suzuki having looked strong all session.

Francesco Bagnaia made a late improvement to drag himself from outside the top ten to sixth in the final reckoning ahead of KTM’s Miguel Oliveira, the Portuguese racer taking seventh having slid out at the final corner in the early part of the test.

Franco Morbidelli was eighth on the sister factory Yamaha ahead of Gresini’s Enea Bastianini, with Martin narrowly clinging onto the final spot within the top ten.

In the Q1 danger zone was RNF Yamaha’s Cal Crutchlow, the Briton impressing in only his third start back as he challenged well in the top ten throughout, though Bagnaia’s late improvement saw him drop to 11th – albeit just 0.326s down on Marquez’s benchmark.

Johann Zarco could only managed 12th on the other Pramac entry, while Motegi runner-up Brad Binder was all the way down in 15th for KTM just ahead of Aprilia pair Aleix Espargaro and Maverick Vinales in a lowly 16th and 17th respectively.

Danilo Petrucci, who makes his MotoGP return this weekend at Suzuki in place of the injured Joan Mir, posted the 22nd best time just over two seconds away from the best effort, the Italian slotting in ahead of Darryn Binder’s RNF Yamaha and Tetsuta Nagashima, who makes his second start of the year as replacement for the recovering Takaaki Nakagami at LCR Honda.