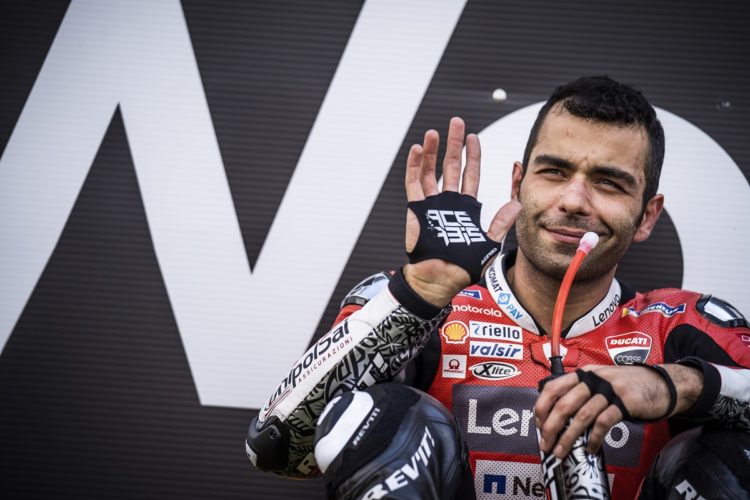 Danilo Petrucci seen during the MotoGP World Championship 2020 in Spielberg, Austria on August 16, 2020

Danilo Petrucci will make his MotoGP return this weekend in the Thailand Grand Prix at the Buriram International Circuit as replacement for the still-injured Joan Mir at Suzuki.

The Italian fell out of the premier class at the end of last year having been dropped by the Tech 3 KTM outfit following a tough year on the Austrian manufacturer’s RC16, Petrucci having previously enjoyed a strong six years with Ducati machinery – a total of two wins being achieved during a two-year stint with the brands factory outfit.

Mir has been out of action since suffering a nasty ankle injury in a first lap crash in the Austrian GP last month, the Spaniard attempting to start in Aragon after missing the San Marino GP before making his injury worse – forcing him out of the Spanish encounter as well as last weekend’s Japanese GP – with Suzuki hoping Mir will be fit to return for the Australian GP in two weeks time.

Having run Kazuki Watanabe and Takuya Tsuda at the San Marino and Japanese races respectively, Suzuki has now selected Petrucci to sub for the 2020 premier class world champion in Thailand – a chance Petrucci reckons is a “fantastic opportunity” to sample the Hamamatsu-based marque’s GSX-RR.

“Needless to say, I’m so happy for the chance to race in Thailand with Team Suzuki Ecstar,” said Petrucci.

“I want to thank the Team for giving me this fantastic opportunity. I also want to thank Ducati and my current team management for letting me take this stand-in ride.

“I’m really curious to jump on the GSX-RR and try it, it looks very fast and we know it’s a winning machine. I’m also eager to work with the Suzuki crew, that I’ve known for a long time now and we have a wonderful relationship.

“I know it won’t be easy, so I’m not putting any expectations on the experience, I just want to enjoy it. I’m also excited to be one of the few riders in history jumping from a MotoGP machine to a Dakar bike, a Superbike, then another factory MotoGP bike!”

Petrucci has enjoyed a varied 2022 racing campaign so far with a maiden start in the gruelling Dakar Rally with KTM coming back in January before running a full season with the Warhorse HSBK Ducati outfit in the MotoAmerica superbike series that came to a conclusion this weekend – culminating in a runners-up finish in the overall standings behind Yamaha rider Jake Gagne.

His United States schedule is likely the reason for Petrucci not being drafted into Suzuki as Mir’s replacement earlier, with the team thought to have been interested in bringing him in for the San Marino GP.