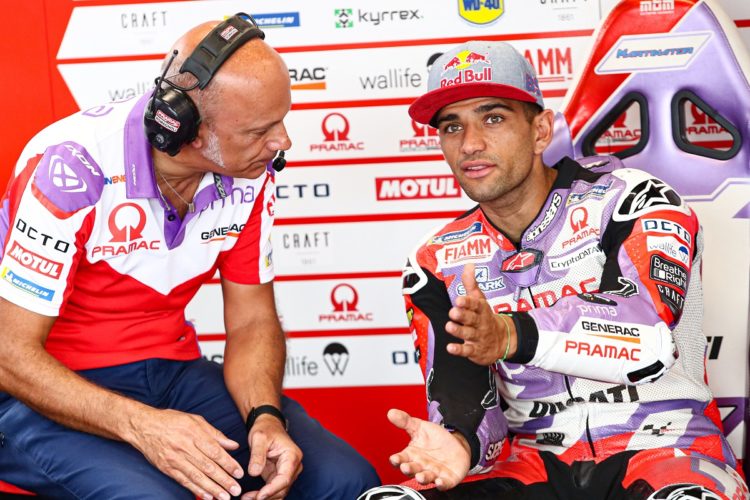 Jorge Martin reckons he could have clung onto the runners-up finish in the Japanese Grand Prix had he not “almost crashed” in the latter stages of the contest.

The Pramac Ducati rider secured his first podium finish since June’s Catalan GP after taking the chequered flag third at the Motegi, though he lost second to KTM’s Brad Binder on the final lap after running into tyre trouble in the closing stanza.

While the Spaniard was thrilled to have ended his rostrum drought, he felt he could have held onto second had he not “almost crashed” after hitting a problem with the engine braking on his Desmosedici, though he also conceded that his choice to use the medium compound rear tyre also contributed to his late-race fade.

“I tried to manage the best I could the rear tyre, so for sure the hard was the better choice today but hopefully we can keep learning for next year,” said Binder.

“I had an issue in the last sector with the engine braking so I almost crashed and lost nearly a second, if that hadn’t happened I think I could have kept the second position.

“When I saw he (Brad Binder) was coming closer I tried to close the lines and exit well, but you could see with his overtake that I couldn’t do that line and it was impossible.”

The 2018 Moto3 world champion revealed he “tried to stick with” runaway race winner Jack Miller in the early goings of the encounter, though he backed off when he realised he was having to take too much from his tyre to do so as the Aussie’s hard-compound rear allowed him to push harder.

“It’s been a while since my last podium, so I’m happy about a really competitive day in general,” added Martin.

“From warm-up I was super strong and I started really good in the race but Jack (Miller) overtook me, I tried to stick with him but I was asking too much from the rear so tried to be calmer.

“Then I made a mistake in the last sector and lost a lot of the gap to the group behind, I kept pushing on but the medium rear wasn’t the best choice today but I’m satisfied to finish on the podium, and I hope to keep this momentum with the new bike that has been tricky to find a base set-up, but we are getting there and we will keep working.

“I tried to save the rear tyre when I was behind (Miller) so I tried to make up the time on braking and corner entry, but then he was opening the gas fully at 100% and I couldn’t because I could follow for a bit but then I would be I trouble with the guys behind.”