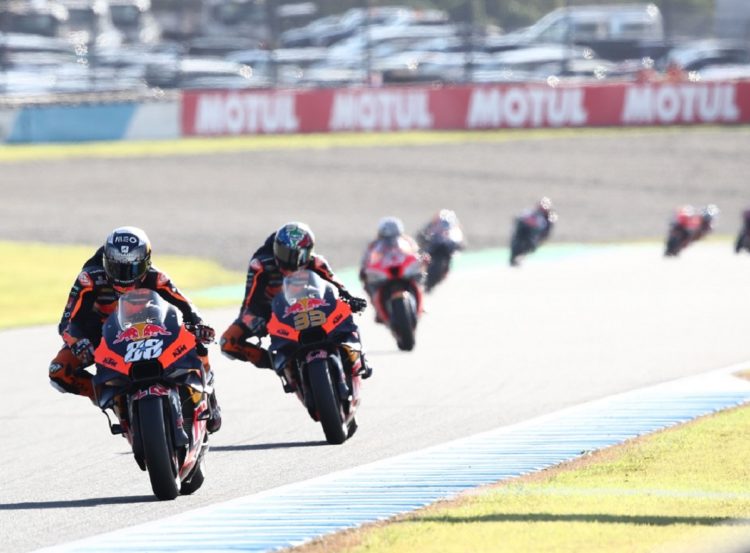 Brad Binder says following KTM team-mate Miguel Oliveira in the Japanese Grand Prix helped to find the speed to finish second as he could “see where I was losing time.”

The KTM rider made a rapid start from his first ever front-row starting spot to take the lead initially, though he soon slipped behind Ducati riders Jorge Martin and eventual race winner Jack Miller.

Team-mate Oliveira soon after bumped him down to fourth, though Binder admitted post-race that being able to follow the Portuguese rider allowed him to improve his lines having struggled for speed in the dry conditions as a result on not enjoying many dry laps due to Saturday running being full wet.

Having learnt where he was lacking pace, Binder later moved clear of Oliveira for third and even chased down a fading Martin for the runners-up spot, moving clear of the Pramac rider with a tidy move at Turn 1 on the final tour – the South African revealing after the race it took “the first 10 or 15 laps to figure things out.”

“It’s so nice to start on the front row, it’s so relaxing going into Turn 1 and I’m really happy with the way the weekend turned out,” started Binder.

“I felt like I was short of quality laps in the dry and it took me the first 10 or 15 laps to figure things out and find where my markers were.

“I made a few mistakes early on because I didn’t trust how much grip I had with the hard (compound tyre) at the beginning, but I kept pushing and fighting through it and we managed to walk away with a second place.

“I was struggling at the beginning but when I got behind Miguel (Oliveira) I could see where I was losing a lot of time, so in the three or four laps behind I fixed that.

“At Turn 1 I thought he went off track because he went really hot on the brakes, so as I turned in I felt a knock on my outside – I’m sorry to him for that because I thought he was out over the kerbs.”

Binder credited KTM’s influence in pushing him to use the hard-compound rear tyre for the race for his late charge to snatch second from Martin having been concerned about opting for it pre-race having never run it across the earlier part of the weekend.

“I’d never tried it (hard tyre) before the race but I have so much faith in the people we have in the team that do all the homework as far as tyres are concerned that I knew if they were pushing for it, they weren’t going to be wrong so I owe a massive thanks to them for steering me in the right direction,” continued Binder.

“When I saw Jorge (Martin) in front it was like a carrot dangling for the whole race and with three laps to go I realised I might be able to catch him.

“I had a lot more edge grip than him, especially on the right hand side, but I was still missing a bit when we picked the bike up so we know what we still have to work on, but it is amazing to be back on the podium.”