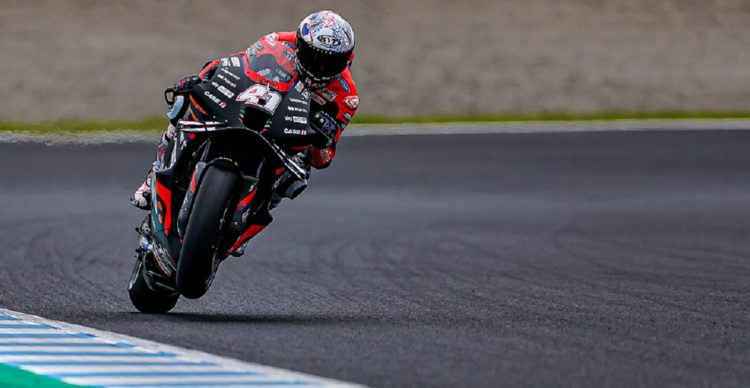 Aleix Espargaro has revealed that his primary RS-GP being left in the “eco” engine mode was the reason he had to start from Motegi’s pit-lane on his spare machine.

The Aprilia pilot looked good to make further gains in the riders championship in the Japanese Grand Prix as he was due to start sixth, well ahead of ninth-placed Fabio Quartararo and Francesco Bagnaia who had to begin down in 12th.

A visibly frustrated Espargaro was forced to peel into the pits at the end of the warm-up lap having struggled to get up to speed and switch to his spare bike, and despite doing a good job of minimising his time loss with the change he missed out on points after taking the chequered flag 16th, thus dropping him to 25 points adrift of Quartararo in the championship.

The Argentina GP victor revealed his chances of making progress into the points were further affected by having to run the unfancied soft-compound rear tyre on his secondary RS-GP due to running out of harder compound rubber, adding he was “very disappointed” to not take advantage of what turned out to be a tough day for his title rivals as well.

“I’m very disappointed, today was a shame because we made a mistake and the electronic guys didn’t remove the eco map from the first sighting lap,” explained Espargaro.

“There was nothing I could do and the bike was very slow, I went into the pits to change bikes but the spare didn’t have the right tyre so it was very tough.

“I knew from the beginning that it was a mistake and I tried everything on the second bike but starting from the pit-lane it’s impossible, especially because of having the wring rear tyre because we had no mediums.

“I stayed out on track in case there was a red flag, but we lost the race on the grid.

“They (Quartararo and Bagnaia) didn’t achieve a lot of points, but this makes me even more disappointed because today I could have beaten them, so it’s a massive shame to lose this opportunity.”

Espargaro at least made up ground on Francesco Bagnaia in the standings after the Ducati rider crashed out while trying to pass Quartararo on the final tour, the Spaniard now seven markers adrift of the Italian and within a race wins-worth of points of the series leader with four races left to run.