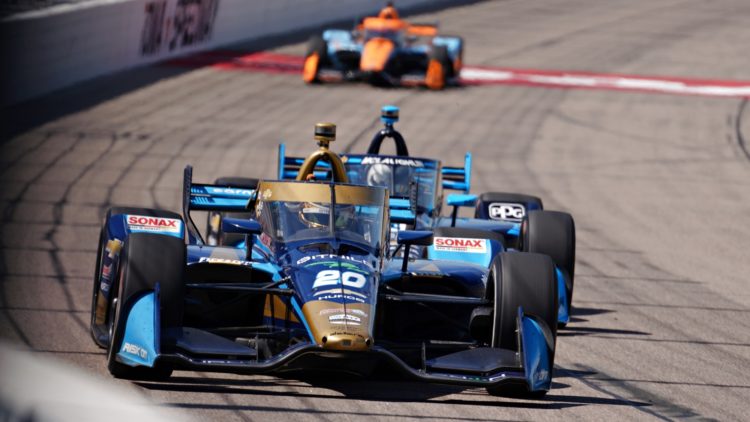 Daly runs a cool suit at most races to help stay comfortable in the cockpit. Photo: Kevin Dejewski

Ever since the introduction of the Aeroscreen in 2020, IndyCar drivers have had to suffer through excessive heat build-up in the cockpit.

There have been multiple discussions on the topic in the past few years, and many drivers have opted to run water-circulating cool suits during the hottest races to help keep themselves from overheating.

That system requires a reservoir and pump be installed in the cars, however, and the extra weight can be a performance-related deterrent that leads to teams encouraging drivers to not run the system, even on the hottest race weekends.

A potential solution was discussed earlier this season, which would involve a mandatory ballast be installed when a cooling system is not used in order to take away the advantage of racing without the cooling system.

Nothing has been formally proposed by IndyCar officials on this front, but multiple drivers including Conor Daly hope that some progress can be made soon.

“I’d love to think so,” Daly told Motorsport Week when asked if a rule could be implemented this offseason.  “Not everyone’s going to be on the same page, driver wise.

“I do hope there’s some progress in the offseason on how we get ourselves cool.  It’s really, really tough.  And when you limit yourself physically, you limit the ability to produce on track action, which is what everyone wants.

“But if you’re dying, or if you’re really struggling, you kinda just have to survive.

“The cool shirt works sometimes, but not all the time.  It’s literally just getting air.  Any air movement to us would help immediately.  It’s the lack of air that’s really painful.”

There are multiple small air inlets that were placed in the design of the Aeroscreen, as well as a rarely-used air scoop that can be installed above a driver’s head, but drivers have reported that they do next to nothing to achieve real airflow through the cockpit.

Some drivers feel that the extreme conditions are just another thing that a modern racer should be physically prepared to handle, but others including Daly, who runs the cool suit nearly every weekend, find their on-track performance is much better when they are comfortable behind the wheel.

Decisions on updated directives from IndyCar, if any are implemented, are not likely to be announced soon and are usually disclosed near the end of the offseason.