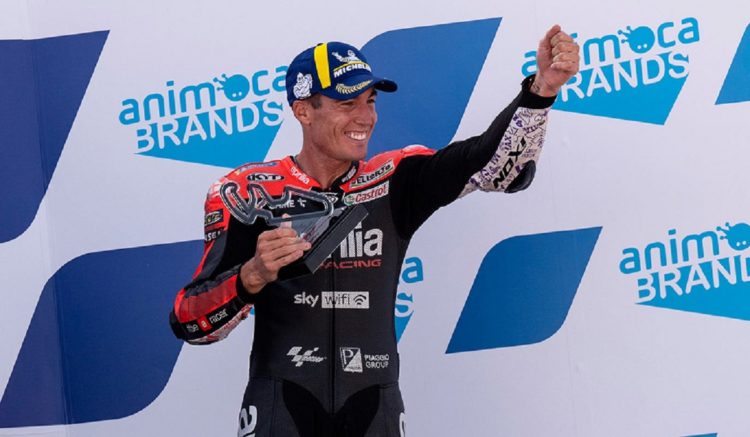 Aleix Espargaro says he is “extremely happy” to have firmly brought himself back into the MotoGP title fight after scoring a sixth podium of the year at Aragon.

The Aprilia rider ran well inside the top five throughout the entirety of the Aragon Grand Prix, though it looked like he would have to settle for fourth after struggling to make a sustained attack on KTM’s Brad Binder.

Espargaro found a second wind in the closing laps though and began to heap pressure on the South African, eventually finding an opening at Turn 1 on the penultimate tour to secure third – reducing his points deficit to series leader Fabio Quartararo to just 17 in the process after the Yamaha pilot crashed on the opening lap.

The Spaniard declared that the championship would be “super hotly” contested over the remaining five races of the season, though accepted that it would be tough to beat the in-form Francesco Bagnaia who currently resides seven points ahead in the standings.

“I’m extremely happy because my goal this weekend was to fight for the podium again, but at the beginning of the weekend I struggled because I crashed twice and despite having speed I had no consistency,” said Espargaro.

“I crashed the second bike so I didn’t have a good feeling on Saturday but I managed to put the bike in a good place knowing the starting spot is so crucial in MotoGP, so it was a good job.

“Today I didn’t have the pace of the two Ducati’s because they are now on another level on every circuit and getting the most from their bikes, so it’s difficult for us to follow them.

“The championship is getting super hot but I feel for Fabio (Quartararo), I didn’t see the crash but luckily he’s OK physically.

“We are now very close Pecco and me, I think Pecco is riding better than us, he has the best bike and he is on a really high level, but this is MotoGP and we are now going to some strange circuits with different temperatures and grip, so anything can happen.

“Third was the best we could do today, so I’m very happy.”

Espargaro also went on to shower praise on Binder, the one-time premier class race winner describing him as “one of the top three riders in MotoGP without doubt” due to the performances he has been putting in throughout 2022 on the rather-unfancied KTM RC16.

“Hats off to (Brad) Binder because I think he is one of the top three riders in MotoGP without doubt but I didn’t expect him to be at that level today so I was shocked and I couldn’t overtake him at all,” continued Espargaro.

“I couldn’t go with Pecco (Bagnaia) and Enea (Bastianini) but I felt I had something more, but I couldn’t overtake him and at the end he destroyed the tyre more than me and I was able to pass him, but he is doing a super good job on the KTM.

“You can see the points he has got this year with a not-so competitive bike, he is doing a great job.”