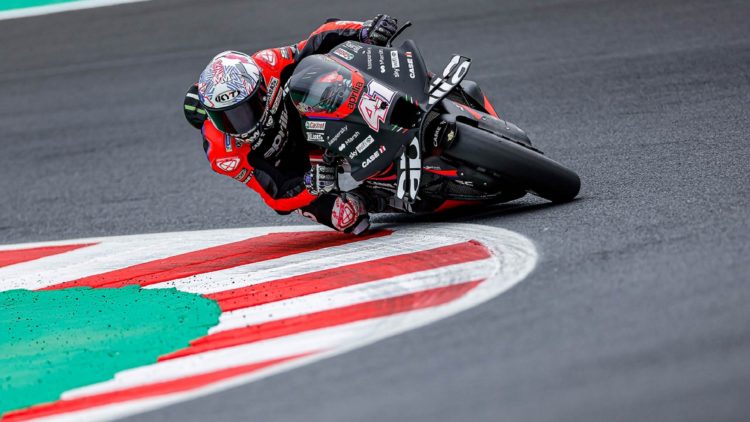 Aleix Espargaro fired off the blocks quickest in the opening practice session for the Aragon Grand Prix at the Motorland Aragon ahead of fellow title contender Francesco Bagnaia.

The best times of the session unusually came all within the opening half of running as the riders looked to try and spend the rest of the outing dialling in their machines for the long-runs, with Espargaro only edging factory Ducati rider Bagnaia just moments after the Italian had taken the top spot.

The Aprilia man’s 1:48.686s left him a slender 0.012s clear of the defending Aragon GP winner, though the former’s outing wasn’t all plain sailing after he suffered a crash at Turn 16 just past the half-way mark of the session.

Having shaken off what seemed to be some pain in his leg following the get-off, Espargaro soon returned to his pit-box on his used-looking RS-GP.

Alex Rins was third fastest for Suzuki ahead of Brad Binder’s KTM, the South African one of the few to shoot up the timesheets as the chequered flag approached, while Takaaki Nakagami enjoyed the new Kalex-developed swing-arm fitted to his Honda this weekend to make it five marque’s within the top five positions.

Johann Zarco broke the pattern in sixth on his Pramac-run Ducati ahead of the Gresini Desmosedici of Enea Bastianini, while Miguel Oliveira ended up eighth on the sister factory KTM.

Championship leader Fabio Quartararo suffered a series of run-off’s throughout the session as he tried to match the front-runners, the Frenchman eventually ending up ninth just ahead of Yamaha team-mate Franco Morbidelli, who completed the top ten.

The returning Marc Marquez elected to start off the weekend without the new Kalex swing-arm for his RC213-V and lapped a respectable 12th overall in his first race weekend session since May’s Italian GP, while Joan Mir also returned from his fractured ankle injury to take 18th for Suzuki.

Cal Crutchlow was a solid 17th in his first MotoGP race outing in nearly a year as he begins his half-dozen event stretch as replacement for the retired Andrea Dovizioso at the RNF Yamaha squad, the Brit only seven-tenths-of-a-second adrift of Espargaro’s benchmark.