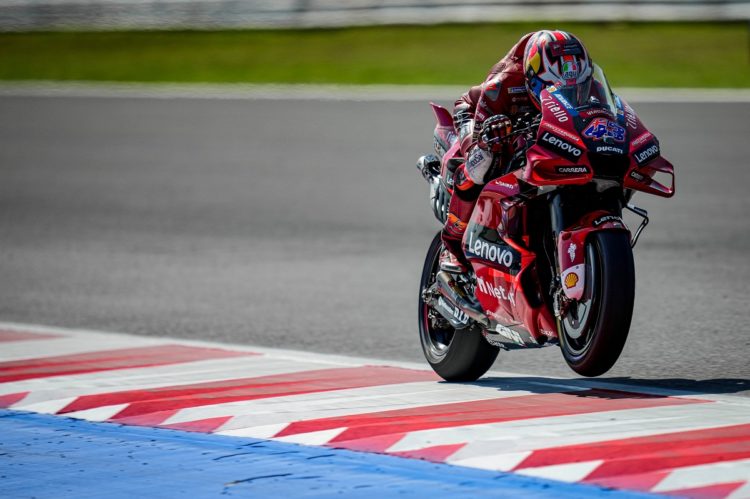 Jack Miller scythed to a first MotoGP pole position of 2022 at Misano after taming a tricky mixed-condition qualifying session, while Francesco Bagnaia will start fifth ahead of Fabio Quartararo.

A light rain shower hit the track just prior to the green light being shown at the start of the pole shootout, facilitating the majority of the 12-rider field to head out on wet tyres in order to scope out the state of the Italian tarmac.

Miller and KTM’s Miguel Oliveira elected though to switch quickly to slicks on the swiftly drying circuit, a decision that soon paid off as the duo banged in fastest lap after fastest lap, forcing the other riders to head in for a bike change.

The remaining ten minutes or so saw a flurry of improvements up and down the field as the grip of the track increased as quickly as the confidence of the riders, with Pramac Racing’s Johann Zarco firing in a 1:32.201s effort as the seconds ticked down as he looked to take a second pole in three events.

Miller though had a little more left in the tank following a slower lap to cool down his soft-compound rubber, the Ducati ace throwing down a 1:31.899s to take over at the head of the timesheets.

Title-contending team-mate Bagnaia was keen to snatch provisional pole as he looked to sustain as little damage from his three-place grid penalty as possible, though the Italian was forced to slot in behind Miller to the tune of just 0.015s.

This means he will start fifth in Sunday’s San Marino Grand Prix behind the now second-placed Enea Bastianini, VR46 rookie Marco Bezzecchi – who also was forced to escape Q1 before challenging in Q2 – and Aprilia’s Maverick Vinales.

Bagnaia crucially though still starts a decent chunk further up the grid than championship rival Quartararo, who could manage only eighth on his Yamaha behind Zarco and the sister VR46 Ducati of Luca Marini.

Aleix Espargaro ended up ninth on the second Aprilia entry ahead of Oliveira, while Franco Morbidelli and Suzuki’s Alex Rins completed the pole shootout contenders.

Jorge Martin was denied a last-gasp attempt of reaching Q2 by virtue of the rain hitting the track in the dying moments of Q1, the Spaniard having to make do with a 13th-place starting spot on Sunday just ahead of Gresini’s Fabio Di Gianantonio.

Honda’s tough weekend continued in qualifying with Alex Marquez its highest representative in a lowly 16th for LCR, the Spaniard slotting in just ahead of Ducati test rider Michele Pirro and Andrea Dovizioso, who will line-up 18th for his last ever premier class encounter.

Pol Espargaro was a disastrous 19th on his factory Honda just clear of team-mate Stefan Bradl, while Suzuki stand-in Kazuki Watanabe got the better of Tech 3 KTM duo Remy Gardner and Raul Fernandez for 23rd.