F1 Manager 2022 Review: A welcome rendition of the F1 world 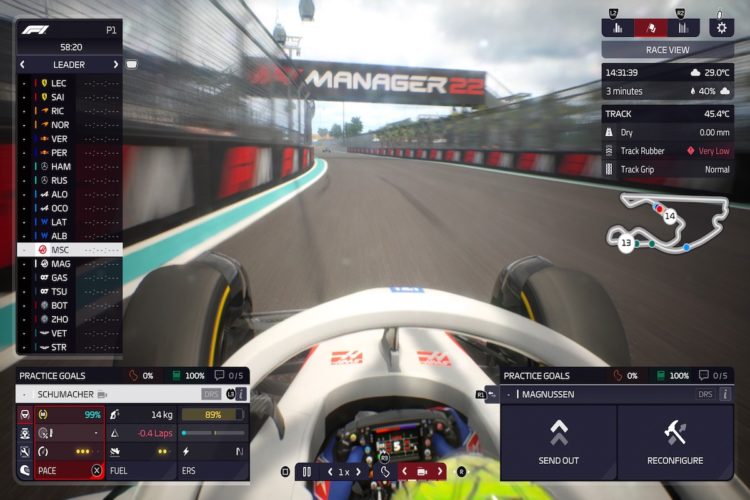 There was a major buzz created online earlier this year when it was announced that an all-new Formula 1 manager game would be released. There was anticipation that the game would offer a new insight into the world of Formula 1, away from the concept of taking control of the cars.

This is exactly what F1 Manager 2022 has delivered. The player has no control over the pedals and steering inputs, and instead is subjected to running a team in a more intricate manner, effectively taking on the role of owner, team principal and strategist.

The release is produced by Frontier Developments, who have experience in management-type games, such as Rollercoaster Tycoon and Jurassic World Evolution.

Having thrust itself into the major franchise that is Jurassic Park (quite successfully, with both JW Evolution and JW Evolution 2 being enjoyable) it faced a whole new challenge with the F1 world. It is no easy feat or task to take on, with the sport currently booming in popularity and engagement.

Upon setting up your career profile in the game, the player chooses which team they will start their journey with. Whether you want to compete for championships immediately with Red Bull and Ferrari or build your way to the top with Williams and Aston Martin, there is a unique challenge involved with each outfit.

One obvious addition going forward with potential future titles would be the inclusion of forming your own team on the grid, which currently isn’t an option. Taking a comparison from the official F1 games from Codemasters, ‘My Team’ has been a popular inclusion in recent games.

You also start immediately in the world of F1 – perhaps going forward, having the option to progress your own outfit through Formula 3 and Formula 2 and make it to the top in a ‘road to glory’ simulation could make for a more exciting journey.

Nevertheless, creating your own squad shouldn’t be a deal-breaking feature for this rendition, the first release from the studio. But getting accustomed to the process of doing a satisfactory job takes time. Mistakes in the early stage of your career seem almost inevitable, and perhaps a player could’ve used that time in the lower formulae to come accustomed to the process of managing a team, rather than getting launched into the deep end.

During on-track sessions, the player has an option to either directly manage the outing, or allow the CPU to do it for you. The latter option saves time, but may not extract as much potential from the session.

Therefore, it’s advisable to manage your drivers during practice, sending them out on planned runs before calling them back in and adjusting their set-up. Finding that balance for both of your drivers is tricky, but listening to their feedback and making changes to the set-up is necessary in order to provide them with more confidence, which translates into on-track pace.

Team radio is a nice inclusion. Real-life driver voices are used, as are those from the race engineers – however the vocabulary is limited, and is mostly just used for when a driver is giving set-up feedback (to which they say simply if it’s good or bad), or if they “copy” a piece of information.

Sending the cars to the track during qualifying at the right time is important, as finding the right gap at the end or taking on the guarantee of clean air earlier with a few minutes remaining makes a vital difference.

The engine sounds are good, perhaps surprisingly so, given that it’s not a driving simulator. It’s important to remember that factor, especially when there are details coming to light such as some of the onboards looking twitchy with the steering input – this game is designed to give you the tools to navigate the sport from behind the scenes, not to experience life as a driver, which countless other games have done in the past.

The broadcast shots are wonderful and the graphics are solid, giving the player another injection of realism.

Race day is where all of your efforts come to a point – all your development and planning only truly matters when the results on track reflect your management labour. You can either set a strategy at the start of the race and stick to it or go in blind, reacting to what occurs on track.

There is one delightful feature that this game includes, and that is red flags. In recent F1 seasons, red flags have been deployed quite often, causing the race to stop for some time before a standing restart is called. It adds an extra layer of adrenaline to grands prix and the same emotions are realised when they occur in the game, providing yet another way a race can spin on its head.

It’s been a long time since F1’s driving games have had the red flag feature, and it’s a welcome addition to F1 Manager 2022.

Weather, Safety Cars and red flags will turn the race on its head, and if you make the wrong choice regarding strategy, you will be punished with a poor result – a frustrating (but perhaps realistic) reflection of just how cut-throat the F1 world can be.

Capitalise on these situations however, and you will feel you’ve accomplished something spectacular.

There are also pay-out bonuses to be earned during qualifying and the races, which contribute to the short-term stability of your team.

Outside of race weekends, there are a number of important factors to manage. Building your factory facilities, which improve staff morality and production, is vital to your team’s growth. You also operate inside the budget cap, which you must consistently monitor as you design upgrades – which don’t come quickly, depending on how many hours you allocate to wind tunnel and CFD testing and how many engineers you have in your arsenal.

There is a huge pool of drivers to scout, if you are interested in getting a hold of them. Each driver has their own level of interest and demands, which has to be considered when looking at your yearly budget. Also available to scout and recruit are technical designers, aerodynamic chiefs and race engineers from F1, F2 and F3. You also have a reserve driver in place that you can hand practice sessions to, aiming to improve their abilities in case they’re needed, or you feel they are ready for a full-time seat in the following season.

Above all, you must meet the expectations of the board, who oversee how you operate the finances, build the team and collect strong results. Your job is to bring success to the outfit on the grid, and getting there is not as simple as turning up and simulating through the experience.

Clever management is needed to succeed, and the path to glory will likely be a bumpy one. But the experience is something wonderful, and this fresh insight has come at a perfect time for the world of F1, when engagement and viewership are ticking upward. The title marks another layer to which the fan can consume the sport in a unique and unrivalled way.