Martin: ‘I had to try or else I wouldn’t sleep’ 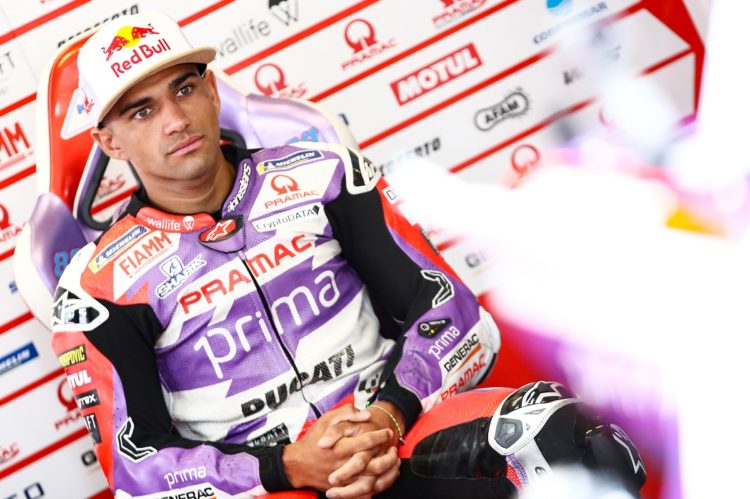 Jorge Martin insists that he has no regrets over his failed move to try and snatch third from Jack Miller on the final lap of the Austrian Grand Prix.

The Pramac Ducati rider was forced to recover around two seconds after running through the gravel at the chicane in the mid-part of the Red Bull Ring encounter while pressuring the Aussie for the runners-up spot, his error also dropping him behind a charging Fabio Quartararo to fourth.

With the Yamaha pilot having subsequently dispatched Miller, Martin tried to relieve the factory Ducati rider of the final spot on the podium with a late dive into Turn 1 on the final tour, though he lost the front of his Desmosedici and went down – though swiftly re-mounted to salvage tenth.

Martin insisted post-race that he felt no remorse over attempting the pass because he reckoned he “wouldn’t sleep” had he sat behind and taken fourth, leaving him “relaxed” about the potential he feels he possesses heading to the upcoming events.

“It was a bit of a disaster today because we missed the podium, I had to try it because I was competitive but overall I am quite happy about the weekend because we were in the top four all the practices, and in the race I was super consistent,” explained Martin.

“I was able to recover the 1.7 seconds I lost with the shortcut (through chicane), so I’m happy even though I missed the podium and crashed, but we are fast and competitive for the next races which is important.

“I was feeling strong at that point, I had to try or else I wouldn’t sleep tonight so I’m more relaxed because of this, I showed my potential which is the most important thing.”

With the decision between the 2018 Moto3 world champion and four-time 2022 MotoGP race winner Enea Bastianini for the second factory Ducati berth in 2023 seemingly not yet made, the latter felt Martin fought him more aggressively than others in the early stages of the Austrian GP.

Martin says that Bastianini was “just another rider”, and that he would have “done the same if it was Pecco or Jack.”

“It was just another rider and he (Bastianini) was in front of me, I would do the same if it was Pecco (Bagnaia) or Jack (Miller), but it was him and I had to try because I needed to go forwards as I felt better.”