Miller: Quartararo ‘made me look stupid’ in late-race pass 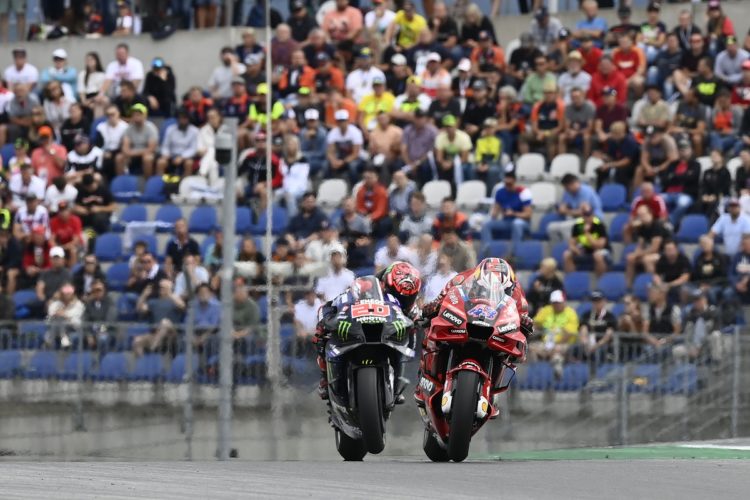 Jack Miller joked that Fabio Quartararo “made me look stupid” after he passed him around the outside of the chicane in the closing laps of the Austrian Grand Prix.

Miller ran in the runners-up position throughout the majority of the encounter at the Red Bull Ring, though fell into the clutches of a charging Quartararo as the race entered its climactic moments having failed to pass factory Ducati team-mate Francesco Bagnaia for the lead.

The Yamaha man struggled to get close enough to attempt an overtake due to the supreme engine power of Miller’s Desmosedici, though took his chance and dived around the outside after carrying more speed into the entry of the Austrian venue’s new-for-2022 chicane complex.

Having placed his M1 firmly on the apex for the second part of the chicane, Miller was left with little choice but to give up the place, eventually taking the chequered flag third – admitting post-race that the series leader had “passed me like I was standing still”.

“I was suffering a lot in that first chicane and then Fabio made me look stupid there, I was just lacking the confidence with the left-hand side to slap the bike down and he had plenty of confidence, so hats off to him it was a good fight,” explained Miller.

“He passed me like I was standing still, I felt like I prepped the exit pretty well but then he just came through and was gone and I was just like ‘Wow, OK then he’s looking good’.

“We went three wide into that top end of the track, so at least we could give a bit of a show.

Miller admitted that he ultimately lacked the outright speed to enact a sustained attack on eventual race winner Bagnaia for the leadership, conceding that the Italian “started to increase the pace” after he initially tried to pass him at Turn 9 in the early tours.

He also added that he felt Jorge Martin’s attempt to snatch away third at Turn 1 on the last circulation was “a bit ambitious”, though the Pramac rider crashing as a result of his failed attack at least allowed him to “bring the result home” as he was struggling with grip in left-hand corners.

“I’m really happy with how the race went, I felt like I had a little bit more and that’s why I had the lunge at Pecco (Bagnaia) early on to try and push the pace a little more,” continued Miller.

“Then when I showed the wheel he started to increase the pace by a couple of tenths every lap and I had my tongue hanging out just trying to keep up, but he did a fantastic race out front with the way he was able to manage it.

“I wasn’t able to do that and was just losing out on the left-hand side especially, nonetheless we brought it home on the podium and we did what we needed to do.

“I think he (Jorge Martin) was a bit ambitious, he wanted to come through and I pulled up the brakes to try and get the cut-back because I could see he wasn’t going to stay on the track and off he went, so it was lucky not to be caught up in that.

“I saw I had a gap so I just tried not to crash and bring the result home.”