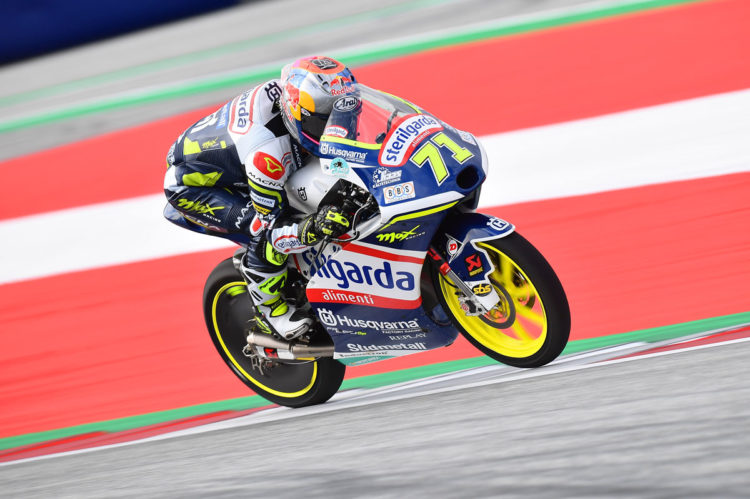 Ayumu Sasaki charged through to take a second Moto3 victory of the 2022 campaign in Austria despite having to serve an early double long-lap penalty that dropped him to 23rd.

The MAX Racing man was awarded the double long-lap punishment for his part in a clash with Sergio Garcia at Silverstone last time out, one that dropped him all the way back from the lead to 23rd by the time he had taken his second lap on the fifth tour.

From here Sasaki fired in fastest lap after fastest lap as he craved through the pack, reaching the top ten just a few laps later before then snatching the leadership away from Tatsuki Suzuki just after half-distance.

From this point on Sasaki utilised his blistering speed to break up the pack behind with only Suzuki, Deniz Oncu and rookie David Munoz able to live with him.

Suzuki threw everything at his countryman over the final couple of laps to try and score his first victory in over two years, though the Leopard man had to instead focus on holding second ahead of an attacking Munoz.

This allowed Sasaki to take the chequered flag in emphatic style by 0.064s ahead of Suzuki to claim his second career Moto3 win, as well as his second in the past three encounters.

Munoz completed the rostrum in the end having passed Oncu late on, while series leader Garcia was the best of the rest in fifth to extend his championship advantage over GasGas team-mate Izan Guevara, who crossed the line seventh just behind Diogo Moreira.

Pole-man Daniel Holgado had a tricky race after being pushed back from the leading group due to an aggressive move by the recovering Sasaki, limiting him to an eighth-placed run ahead of the sister MAX Racing entry of John McPhee and CIP Greenpower’s Kaito Toba.

Dennis Foggia saw his title hopes take a hit with a rather average run to 12th after struggling for speed all race, while Jaume Masia saw his rather remote championship chances reduced further after crashing at Turn 3 – the KTM Ajo pilot eventually taking 19th after remounting.

Garcia now holds a five point advantage over Guevara heading to Misano in two weeks time, with Foggia now falling to 49 markers adrift of the leader, while Sasaki’s success sees him vault from sixth to fourth in the standings a further six points back.