Quartararo ‘fought like a lion’ amidst Austrian GP charge

by Kyle Francis
A A
2 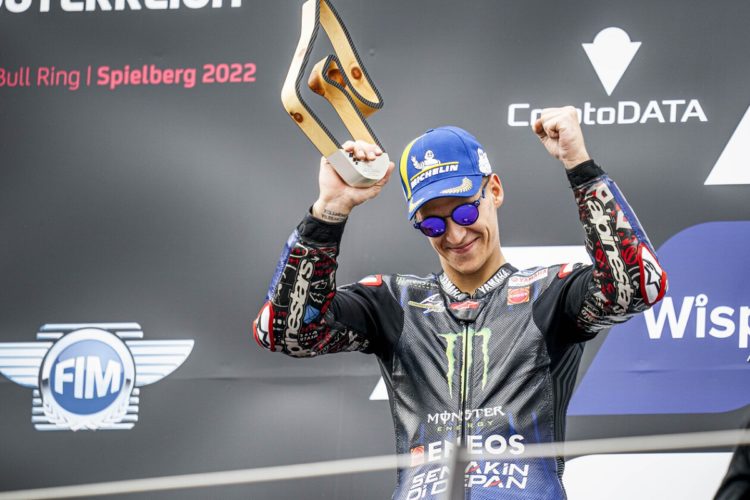 Fabio Quartararo insists he “fought like a lion” while trying to make progress during the Austrian Grand Prix to try and limit the points damage to eventual winner Francesco Bagnaia.

The factory Yamaha pilot dropped back from fifth on the grid to sixth after losing out to Aprilia’s Maverick Vinales in the early laps, though he started to make good progress towards the front running Ducati’s across the second half of the encounter.

Having taken advantage of mistakes by both Vinales and Pramac Ducati’s Jorge Martin, the series leader pulled off a stunning around-the-outside move on Jack Miller for second with only a handful of laps to go, but despite closing down Bagnaia he ran out of time to try and score his and Yamaha’s maiden success at the Red Bull Ring as he took the chequered flag 0.492s adrift of the Italian.

Quartararo feels that he could have challenged his championship rival for victory with “one or two more laps”, though was left satisfied to extend his overall points lead over Aprilia’s Aleix Espargaro to 32 having “fought like a lion.”

“It doesn’t quite feel like a win because we only got 20 points, but to prepare an overtake is the most difficult thing for us,” explained Quartararo.

“We did it well and it felt really nice, especially the move on Jack (Miller) in the chicane and the one on Enea (Bastianini), so today I take away a bit more confidence with my riding style.

“After two tough races it was good to be back and feel my potential, I fought like a lion and some of the moves were really nice.

“I think if I had one or two more laps I could have tried something, but unfortunately it was too late.

“This result gives me a big boost for the future because even though Pecco (Bagnaia) and Ducati will be fast at Misano, we can be super fast there so I’m confident for the future.”

The reigning MotoGP world champion added that his move on Miller at the second part of the Red Bull Ring’s new chicane was actually unintentional, admitting that he “braked a little too late” on entry while the Aussie broke earlier than anticipated, Quartararo rating the move “within my top three.”

“I braked a little bit too late and he broke a bit earlier than the previous laps, so I thought I’d give it a try and even though I thought he might cross over, I had to try something because I couldn’t catch him under braking,” continued Quartararo.

“I think he was a little surprised he couldn’t cut me back, I heard (Jorge) Martin on the left and was hoping he wouldn’t overtake me, but it was a really nice move.

“To be honest I haven’t made that many overtakes in my career because that’s where we struggle, but of course this was one of my best and it certainly rates within my top three.”