Bagnaia cruises to Austrian MotoGP success ahead of Quartararo 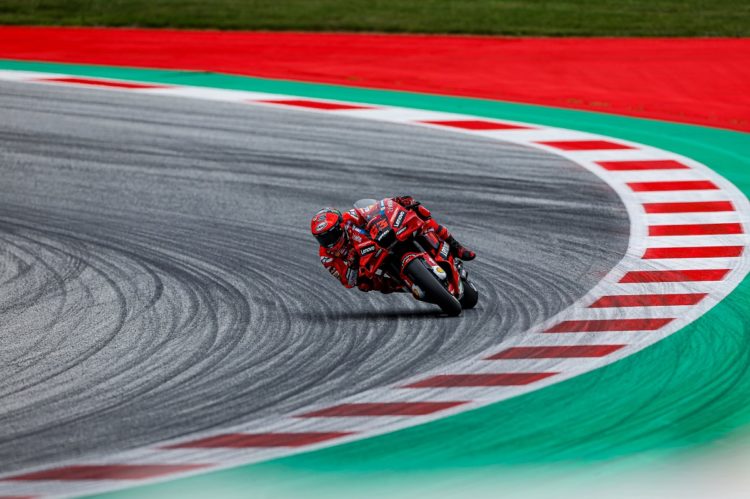 Bagnaia moved into the lead off the line after getting the jump on pole-man Enea Bastianini, the factory Ducati rider holding off the Gresini racer across the opening lap.

He was afforded a decent gap over his pursuers as Bastianini ran into suspected tyre difficulty, first losing second to the second factory Ducati of Jack Miller before Fabio Quartararo pulled off a switch-back at the chicane to grab second just moments later.

The Italian’s day would come to an early end just a couple of corners later as he ran off through the gravel at Turn 4 before eventually pulling into the pits to retire.

Bagnaia in the meantime was forced to fend off Miller across the opening half of the race as the Aussie pressured him, though he was able to eventually ease away as he came under pressure from Pramac’s Jorge Martin.

Bagnaia’s main threat in the closing laps would be title rival Quartararo though after the Yamaha pilot first moved clear of Martin after the Spaniard ran wide at the chicane before then snatching second from Miller with a stunning around-the-outside pass in the middle of the same complex.

Quartararo reduced Bagnaia’s lead right down across the final couple of tours but ultimately ran out of time for a sustained attack, leaving Bagnaia to take the chequered flag just 0.492s clear of the Frenchman.

The battle for third also went down to the wire between a fading Miller and Martin, though the position was settled after the latter tucked the front of his Desmosedici on entry to Turn 1 on the final lap while pushing for the final rostrum spot, leaving Miller to complete a factory Ducati 1-3.

Luca Marini put in an impressive fightback from 13th on the grid to take fourth for VR46 Ducati, with Johann Zarco taking fifth on his Pramac-run Ducati.

Aleix Espargaro ran into tyre trouble late on having at one point pressured Quartararo and dropped to sixth ahead of KTM’s Brad Binder, who narrowly held onto seventh ahead of Suzuki’s Alex Rins.

Like team-mate Marini, Marco Bezzecchi also enjoyed a spirited charge to bag ninth from 20th ahead of Martin, who managed to remount following his spill to round off the top ten.

Darryn Binder saw an encouraging run – having got as high as 12th after starting 24th – ended with a late crash, while Franco Morbidelli also saw points go begging with a crash of his own on the sister factory Yamaha.

Joan Mir’s rotten 2022 campaign continued as he recorded his sixth DNF of the year with a crash at Turn 4 on the opening circulation.

Bagnaia’s success sees him close to 44 points adrift of Quartararo with seven rounds remaining, the Italian now only 12 back from Espargaro.