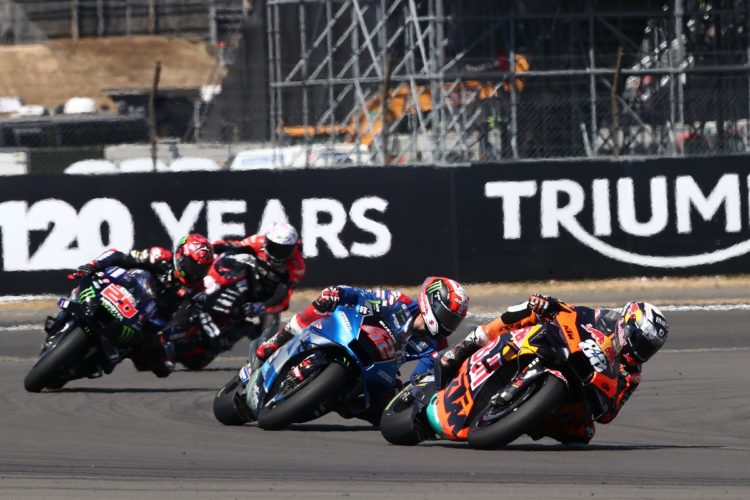 Miguel Oliveira believes a late decision to switch to the hard compound rear tyre on the grid ahead of the British Grand Prix facilitated his thrilling charge through the field.

The factory KTM rider was forced to recover from a lowly 13th on the grid after the Austrian marque once again lacked pace over a single tour, Oliveira swiftly moving his way into the top ten after making a fast start.

The Portuguese ace continued to make progress throughout the 20-lap sprint as he kept his rubber alive unlike his immediate rivals, eventually scything through to sixth by the time he took the chequered flag.

Oliveira reckons a last-minute switch from the medium compound rear tyre to the harder construction on the grid ahead of the encounter was key to his impressive race performance, though conceded KTM’s poor qualifying record in 2022 was clearly costing it top results.

“I’m happy because at the end we had a good pace and we managed to overtake in the last few laps, but we are left with the feeling that if we had started further in front we could have challenged for more,” explained Oliveira.

“It was a difficult race and quite hard to read because I didn’t have much grip in the beginning, I could see the guys pulling away a bit so I thought I was starting to get into trouble.

“The pace stayed consistent though and I could remain with the front guys so it’s great to finish with a great result with a strong overall weekend, qualifying was tough and that is the biggest place we need to improve to increase our chances of a better race result.

“I think our approach to the weekend was the correct one, at the last moment we decided to use the hard (compound) rear tyre in warm-up and that gave us a better idea of how we could challenge in the race.

“It was really hard during the weekend to try every tyre in good conditions, but luckily we made the right decision at the last moment on the grid to go with the hard rear.”

The four-time MotoGP race winner feels that the updated exhaust system KTM brought for the RC16 at Silverstone was a “positive” development, affirming that he is confident the manufacturer is “close” to being able to challenge for top five results on a more consistent basis.

“The (new) exhaust also seems to be positive, we tried a couple of things with the front forks but it was only one session and that was based more on the 2023 season, but the team is working well and hopefully we can continue in this way,” added Oliveira.

“Of course we want to continue in the top five positions, we are close and I think this is achievable but at the moment it is too early to see.”