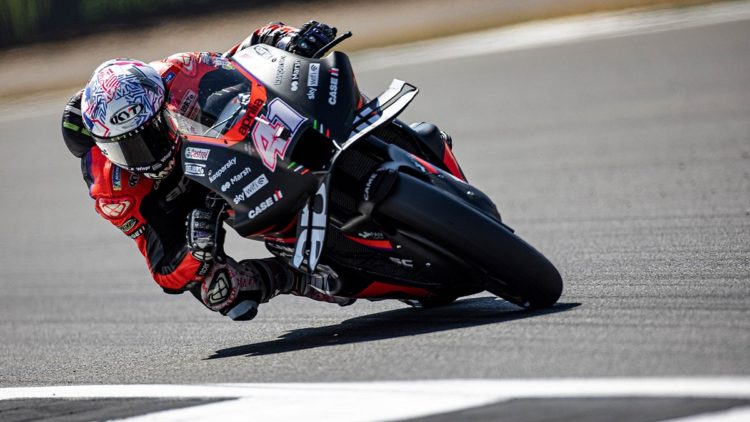 Aleix Espargaro conceded that “pain was not an excuse” for his run to ninth in the British Grand Prix, admitting he “didn’t really feel competitive.”

The Aprilia was expected to be one of the favourites for victory given his electric pace on Friday and in FP3 on Saturday morning at Silverstone, though his weekend took a negative turn after suffering a horrific high-side in FP4 that left him with severe pain in his ankles, back and neck.

Having luckily escaped any serious injury he elected to take part in the race after qualifying sixth just an hour after the crash, though he ultimately struggled for speed and slipped to his eventual finishing position of ninth – dropping a point to main title rival Fabio Quartararo as a result.

Espargaro doesn’t believe the discomfort he was feeling during the race was an “excuse” for his average run, revealing he was struggling for overall traction in right-handed corners.

“When I was lying on the tarmac yes (finishing ninth) because I felt a lot of pain with my feet and was struggling with energy, but it’s fair to say I improved quite a lot during the night because the doctors on Saturday did a really good job,” explained Espargaro.

“The pain was not an excuse for ninth place, obviously I couldn’t ride comfortably and couldn’t ride freely on the bike, I was losing a lot of time at the corner I crashed yesterday but overall I’m satisfied because I didn’t really lose anything in the championship fight.

“I didn’t really feel competitive during the race which is a shame because I showed good speed during the weekend, and I’m not sure why I didn’t have traction in the right-hand corners.

“We lost a good opportunity because I was strong all weekend and could have recovered good points to Fabio (Quartararo), but this is racing.”

Espargaro was receptive to Francesco Bagnaia – who is currently on a two race win streak – to joining into the thick of the title battle, the Italian having recovered 42 points on championship leader Quartararo across the last two events to sit 49 adrift with eight encounters remaining.

The Argentine GP victor reckoned that the emergence of Bagnaia’s title tilt would put “more pressure” on Quartararo, allowing him to range closer to the top of the points tree in the process.

“I’ll need to rest before Austria as my ankles are really painful as are my neck and back, hopefully I can have two or three days of rest and then later next week I can train a little bit.”