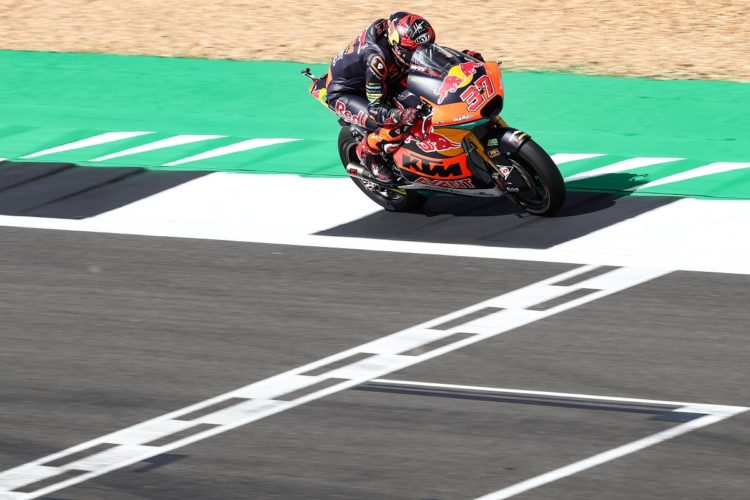 Augusto Fernandez snatched away victory from Alonso Lopez in the Moto2 British Grand Prix with a final lap manoeuvre to take the championship lead.

The Spaniard was part of a five-man tussle for supremacy across the 18-lap Moto2 sprint, running for the bulk of the race in fourth before later passing Honda Team Asia’s Ai Ogura and Pons’ Aron Canet in the closing stages to try and chase down long-time leader Alonso Lopez.

The Speed Up rider wrestled the leadership away from a fast-starting Ogura in the early circulations while Fernandez tried to find his feet after losing ground from pole, though the two were reunited with just a few laps remaining as Lopez began to struggle for grip.

Fernandez pressured Lopez hard over the final laps but failed to find an opening until the run down to Brooklands for the final time, the KTM Ajo pilot managing to get a better exit from the preceding Aintree bend.

He dived through on the inside of Lopez at Brooklands to clear him on entry to Luffield, and despite the Speed Up getting a better exit from the right-hander it was a case of too little too late, leaving Fernandez to score a third-straight win and take the series lead.

Lopez still managed to score a maiden Moto2 podium finish in what was a strong ride, while home hero Jake Dixon fought off Canet in the closing laps to score his third rostrum of the year in third.

Seemingly starting to struggle with grip towards the end Canet then lost fourth at the death to Ogura, the duo covered by less than two-tenths-of-a-second across the line.

Celestino Vietti recovered from a sluggish start as well as his long-lap penalty for irresponsible riding in practice to take sixth ahead of Joe Roberts, with Jorge Navarro on the sister Pons entry claiming eighth.

Filip Salac secured his best ever Moto2 result in ninth for Gresini, while Bo Bensenyder completed the top ten for the SAG squad.

Tony Arbolino salvaged 12th after narrowly missing a crashing Albert Arenas just past mid-distance, the GasGas man having lost control of his machine at Beckett’s before the bike re-joined the track right ahead of the Marc VDS rider.

The Italian was thus forced to run off and dropped out of the top ten, while Arenas retired on the spot.

Fernandez’s fourth win of the year sees him open up a 13 point lead over Ogura in the riders standings heading to Austria in a fortnight, with Vietti a further two markers adrift.