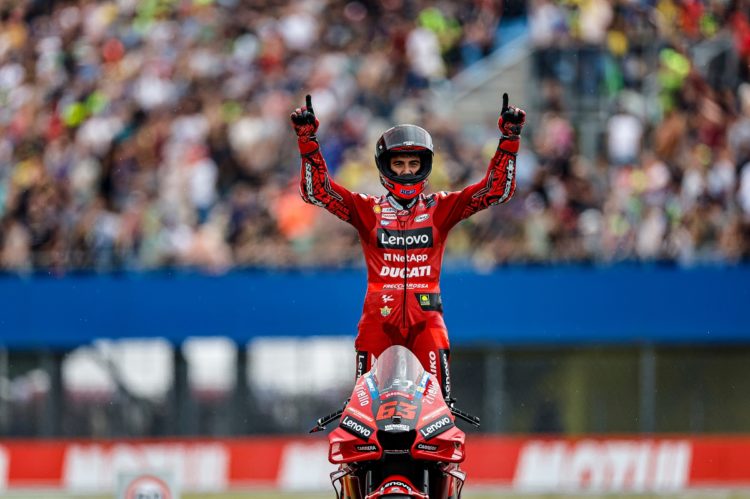 Bagnaia made up a spot early on off the start to slot into fourth just behind factory Ducati team-mate Jack Miller, though he looked to be struggling a touch as he soon came under pressure from Vinales after being passed by a fast-starting Alex Rins.

Having re-taken a couple of positions as a result of pole-man and leader Johann Zarco crashing out at Village just a few laps in as well as Quartararo serving his long-lap punishment, Bagnaia’s speed seemed to improve as he later moved into second at the expense of Miller before turning his attentions to leader Rins.

The Suzuki man seemed to be fading having recovered from a lowly 11th on the grid to first, Bagnaia utilising his Ducati’s power to move into the leadership at Stowe with just over half-a-dozen tours remaining.

Despite coming under pressure from a charging Vinales over the final few circulations – briefly losing the lead to the Spaniard at Village on the penultimate lap – Bagnaia would ultimately hang on to score an unlikely success by 0.426s over Vinales, who scored his best result so far for Aprilia.

Miller ended up clinging onto the final rostrum spot to make it both factory Desmosedici’s on the podium, while Enea Bastianini finished off a late charge of his own to claim fourth after scything through from outside the top ten across the second half of the encounter.

The Gresini rider stole the spot from Pramac’s Jorge Martin with a late dive at Brooklands on the final tour, the latter thus forced to settle for fifth behind his chief rival for the second 2023 factory Ducati berth.

Miguel Oliveria enjoyed a spirited comeback to take sixth for KTM after passing the fading Rins and Quartararo in the closing stages.

Factory Yamaha rider Quartararo ran second early on before falling back to fifth after taking his long-lap, though his speed soon dropped off drastically – facilitating a slow fall through the top ten across the remainder of the sprint.

He even came under pressure from the injured Aleix Espargaro at the death, though he eventually took the chequered flag just ahead of his title rival by just over a tenth-of-a-second, the Aprilia man completing a brave ride to secure ninth ahead of top rookie Marco Bezzecchi.

Brad Binder had an uncharacteristically quiet afternoon to take a distant 11th, while Takaaki Nakagami recovered from 20th on the grid to end up as top Honda in 13th just ahead of factory RC213-V rider Pol Espargaro.

Franco Morbidelli took the final point in 15th having run just outside the top ten early on, the Italian holding off countryman Andrea Dovizioso and LCR’s Alex Marquez for the last marker.

Joan Mir’s tough 2022 campaign continued after the 2020 MotoGP world champion crashed at Stowe while chasing Quartararo, the Spaniard still yet to score a rostrum this season.

Quartararo’s points lead now stands at 22 over Espargaro heading to Austria in two weeks time, with Bagnaia’s success lifting him to third overall 49 away from the Frenchman.