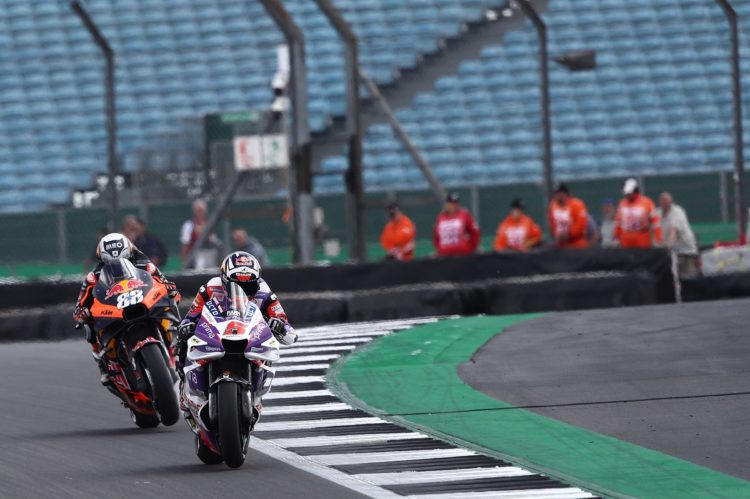 Johann Zarco flew to a second pole of the 2022 MotoGP season by obliterating the Silverstone lap record by over four-tenths-of-a-second, the Frenchman heading Aprilia’s Maverick Vinales.

Series leader Fabio Quartararo came out the blocks quickest in the early stages of the pole shootout, the Yamaha man firing in a 1:58.259s tour to lead Ducati’s Jack Miller and Vinales, the Friday leader’s path to pole looking easier after FP3 leader Aleix Espargaro suffered a nasty high-side in FP4 that left him knocked-about ahead of qualifying.

He struggled to find any clear air on his final set of laps though as riders queued up behind to take a dose of slipstream from his M1, Miller slotting in directly behind as Quartararo started his final gambit.

In the meantime the roughed up but physically-fine Espargaro managed to secure provisional pole with an all-time two-wheeled lap record of Silverstone, his 1:57.966s leaving him well clear at the top.

Quartararo soon managed to move clear of his effort though was immediately eclipsed by the following Miller by fractions of a second, before Zarco managed to find well over a tenth-and-a-half on his fellow Ducati rider to head to the top of the times with a 1:57.767s.

The only rider that could beat him was the sister Aprilia of Vinales, though the Spaniard would ultimately come up 0.098s short of ripping away Zarco’s pole – leaving the two-time Moto2 world champion to lead the field on Sunday.

Miller clung onto the final spot of the front row just behind Vinales, while Quartararo’s target of scoring a second straight British Grand Prix success will be made all the harder from fourth on the grid, the reigning series champion having to take a long-lap penalty in the opening laps to boot following his Dutch TT clash with Espargaro.

Francesco Bagnaia completed the top five on his Ducati ahead of Espargaro, who is sure to be a threat for victory from sixth on the sister Aprilia, while Marco Bezzecchi was a strong seventh for VR46 Ducati having escaped Q1.

Enea Bastianini joined his fellow customer Desmosedici rider in progressing from the opening segment of qualifying en-route to eighth ahead of Pramac’s Jorge Martin, while Luca Marini rounded off the top ten.

Suzuki duo Alex Rins and Joan Mir once again struggled to find outright speed when it mattered in Q2 to finish off the shootout runners in 11th and 12th respectively.

KTM twins Miguel Oliveira and Brad Binder meanwhile narrowly missed out on a Q2 passage – limiting them to 13th and 14th on the grid – while Alex Marquez was top Honda in a lowly 17th just behind the improving Remy Gardner’s Tech 3 KTM.

Pol Espargaro will take the start from a disastrous 19th with the other LCR Honda of Takaaki Nakagami 20th, the Japanese ace lining up just behind the continually struggling Yamaha of Franco Morbidelli.

RNF Yamaha duo Darryn Binder and Andrea Dovizioso will complete the grid in what was another dreadful qualifying session for the Malaysian outfit.