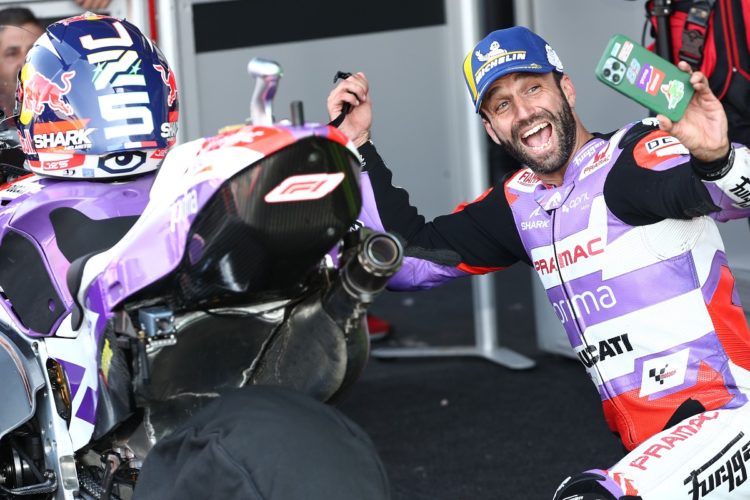 Johann Zarco was left ecstatic at scoring a first MotoGP pole position at Silverstone – his eighth overall – and admitted the result “makes me proud.”

The Pramac Ducati has enjoyed a potent weekend at Silverstone so far, the Frenchman having lapped within the top five in every practice session – including scratch times in FP1 and FP4 – before storming to a second pole of the 2022 season in qualifying for the British Grand Prix.

Having smashed the two-wheeled lap record of Silverstone by over four-tenths-of-a-second in the process, Zarco admitted starting at the very front at the historic venue “makes me proud”, a result he feels proves he has a good chance of potentially fighting for a “bit more” than a podium finish.

“I’m really happy because to be fast on this historic track makes me proud, it’s an interesting circuit and when you can find the speed you can enjoy it a lot,” explained Zarco.

“Starting on pole tomorrow will be useful to have a chance of a podium, and why not a bit more because the pace is interesting and tomorrow I’ll hope to make a step forward with the team to be faster still.

“I can be with the top three because the hard rear tyre gave me good laptime which is positive, importantly the temperature in the race should be higher than today but we’ll see.

“We just need to be focussed and give my best, I think it’s possible to do well.”

Zarco added that he feels he will come under a multi-pronged attack from several riders on different machines during Sunday’s 20-lap contest, the two-time Moto2 world champion reckoning the likes of Jack Miller, Aprilia’s Maverick Vinales as well as series leader Fabio Quartararo – who has to serve a long-lap penalty early in the encounter – all have good chances of fighting for supremacy.

“Everyone is pretty strong, we know Jack (Miller) loves this track and will be fast from third position, and he can stay in front for the whole race,” continued Zarco.

“(Maverick) Vinales is also looking good, and Fabio (Quartararo) even with the penalty (could be a threat) because the long-lap here is quite short and he was riding the line pretty well, so I think he will be fighting for the podium and I will just take the opportunity of pole and see what happens.”