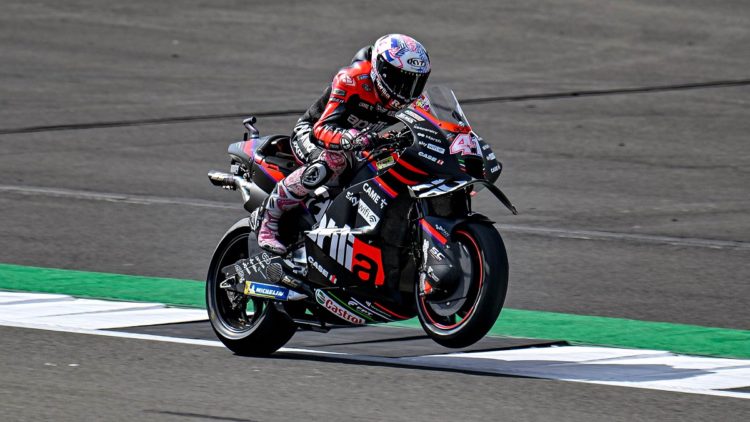 Aleix Espargaro moved to the head of the times on Saturday morning in FP3 for the British Grand Prix at Silverstone, though could be investigated for holding up Francesco Bagnaia.

The Aprilia rider – much like the bulk of the MotoGP field – elected to focus primarily on long-runs for the majority of the 45-minute session, though he and team-mate Maverick Vinales were the first to bolt on fresh rubber to try and have a run at Fabio Quartararo’s rapid effort from Friday that saw him lead the way overnight.

Espargaro immediately posted a 1:58.695s to go around two-and-a-half-tenths-of-a-second faster than the Yamaha pilot’s FP2 gambit, though Vinales swiftly bumped his fellow RS-GP rider to second with a 1:58.599s.

Not content to settle for second behind his Assen rostrum-finishing stable-mate, Espargaro fired in a storming 1:58.254s effort on his second lap of the run to re-take the top spot, one he would keep to the very end as the rest of the competition came up short.

Pramac Ducati’s Jorge Martin got to within 0.028s of the Spaniard with a last-gasp flyer to slot in just ahead of factory Ducati man Jack Miller, who utilised a handy slipstream from Quartararo to move into the top three.

Johann Zarco looked set to challenge Espargaro’s benchmark at the death before an untimely crash into Village, one that left him fourth overall ahead of Vinales.

Quartararo was shuffled down to sixth in the final reckoning ahead of Bagnaia, who was forced to do an extra flying lap after being put off by Espargaro on the entry to Village and thus causing the visibly angry Italian to run wide – though it is currently unknown whether the incident will be investigated.

Joan Mir flew the flag for Suzuki in eighth ahead of VR46 Ducati’s Luca Marini, while the sister GSX-RR of Alex Rins rounded off the top ten and guaranteed Q2 runners.

Marco Bezzecchi just missed out on an automatic pole shootout graduation on the second VR46 entry, the rookie just heading Gresini’s Enea Bastianini and Yamaha’s Franco Morbidelli, who showed improved pace in FP3 thanks to a tow from team-mate Quartararo.

Miguel Oliveria was fastest KTM in 14th ahead of LCR’s Alex Marquez on the best-placed Honda, while the soon-to-be retiring Andrea Dovizioso again struggled to 18th in the session just ahead of the similarly struggling Brad Binder on the other official KTM RC16.