2023 IMSA calendar announced at State of the Series presentation 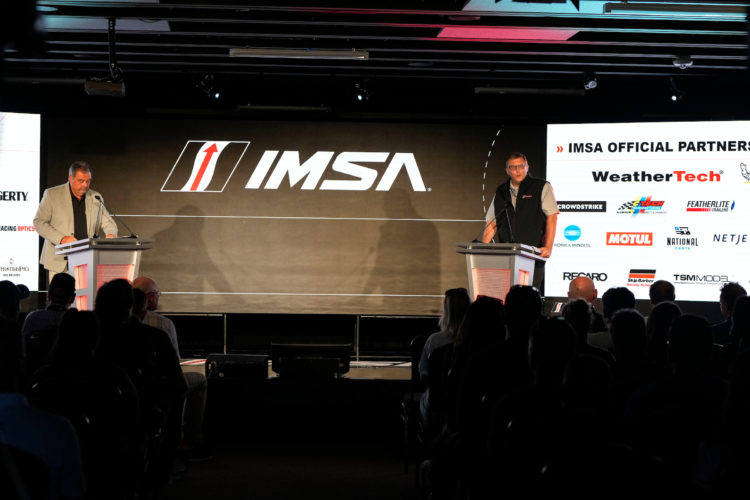 IMSA State of The Series

The 2023 IMSA WeatherTech Sport Car championship schedule for both the main series and the Michelin Pilot Challenge was released at the State of the Sport presentation in Elkhart Lake, Wisconsin ahead of the race at Road America. Only one track changed with the addition of the Indianapolis Motor Speedway event in September which comes at the expense of Mid-Ohio.

The calendar features four endurance events with the Rolex 24 Hours at Daytona kicking off the season in late January. The 12 hours of Sebring follows in mid-March and is the last 5 class race until the Six hours of The Glen in June. In between we have a three class showing in Long Beach on the street course with the new GTP class being joined by GTD and GTD Pro.

LMP2 joins the GTs and GTP for the Laguna Seca round in May, and we get back to full class racing with the Six hours of The Glen in round 5. Every class but LMP2 is slated round 6 at Canadian Tire Motorsport Park, then the series moves on to the first GT Challenge at Lime Rock Park.

Full class racing returns at Road America with their normal early August dates and is followed by the second GT Challenge at Virginia International Raceway for round 10. The new addition to the calendar is slotting in a round 11 with a full class sprint event at Indianapolis Motor Speedway on the road course. 2023 will be a 2-hour 40-minute event, but there are plans to make it an endurance event in the future. The season closes out at Road Atlanta with the 10-hour Petit Le Mans.

The Michelin Pilots Challenge supports the main series at every event except for Long Beach, but they have their own slot on the Streets of Detroit to make up for it. LMP2 and LMP3 have six events each but the 24 Hours of Daytona will not count twords either classes season championship points.

Another notable exclusion from the calendar is the NASCAR Chicago street race. IMSA was announced to support NASCAR on their first street race, but it was unclear which class would be represented. With its exclusion off the main calendar its implied that one of the lower IMSA series will be on the grid that weekend.

Overall we are in for another exciting season of IMSA action. With the introduction of the new GTP class and a new race in the motorsport capital of the world, IMSA will be must watch racing in 2023.