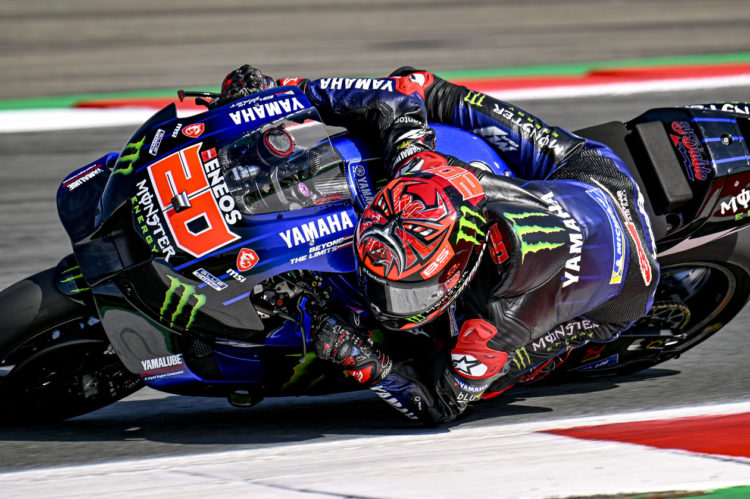 Fabio Quartararo ended second practice at Silverstone for the British Grand Prix quickest as the only man to lap underneath the 1:58s bracket on Friday.

The Yamaha rider focussed on putting in race simulations as well as practicing the penalty loop for the bulk of the session in anticipation of the long-lap punishment he will be forced to take on Sunday for his part in a clash with Aleix Espargaro at Assen six weeks ago.

Like the majority of his peers as the session raced towards its conclusion the reigning MotoGP world champion elected to bolt on a fresh set of tyres for a time attack run, Quartararo firing in a 1:58.946s at the death to secure FP2 honours and lead the field into Saturday.

Joan Mir enjoyed his strongest Friday in some time as he ended up second overall just 0.154s adrift of Quartararo, the Spaniard eventually getting the better of Suzuki team-mate Alex Rins after he led the way in the closing stages before dropping to seventh as a flurry of riders improved.

Maverick Vinales picked up from where he left off at Assen by ending the day third on the first of the Aprilia’s ahead of FP1 pace-setter Johann Zarco, while the sister RS-GP of Espargaro rounded off the top five.

Miguel Oliveira was a strong sixth for KTM ahead of Rins who failed to find more time at the very end of the test having led the bulk of it, while Gresini’s Enea Bastianini bagged eighth while testing an unusual new set of mini-winglets on the rear of his Ducati.

Jack Miller overcame an early crash at Stowe to close out Friday in ninth, while Marco Bezzecchi was fastest rookie in tenth.

Francesco Bagnaia has work to do on Saturday as he ended off FP2 down in 11th just ahead of VR46’s Luca Marini, with Jorge Martin 13th on the other Pramac entry.

Andrea Dovizioso and Franco Morbidelli continued to struggle on their respective Yamaha prototypes all the way down in 19th and 20th respectively – over a second down on the flying Quartararo – with Darryn Binder 23rd on his M1 having also fallen victim to Stowe early in the session. 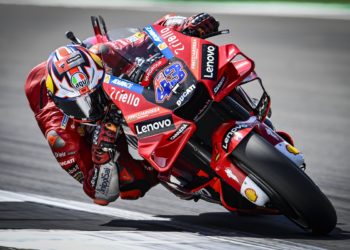