Herta’s focus on next season amid mechanical failures 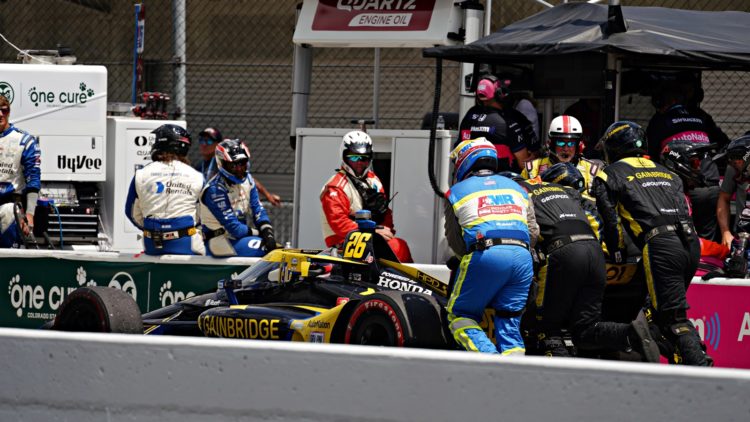 Herta's car is pushed down pit lane after a gearbox failure at IMS. Photo: Kevin Dejewski

Luck has not been on Colton Herta’s side this year and that is no secret. The California native started the season as a heavy championship contender but with five races left on the calendar, Herta’s 2022 has not gone according to those predictions.

A streak of mechanical failures has left Herta sitting down in 10th in the points standings, well behind the drivers at the top of the order.

That positioning has left the 22-year-old to already shift his focus to building momentum for next year, despite there being four races yet to run in this season.

“I mean, at this point, yeah, because we’re not — realistically we’re not going to win the championship. It’s too far out of reach.” Herta said in a press conference earlier in the week.

“Maybe if we have an amazing string of the rest of the races we can maybe creep into the top five [in the points], but that would be a pretty big ask.

“I’ll just kind of use the end of this season to focus on the next season and kind of butt through it. We’ve got really good races coming up for us, we just need to maximize what we can do on those weekends.”

Herta has taken his Gainbridge Honda to the podium twice this year with a P2 in Toronto and what may go down as a season-best performance in the wet on the IMS road course in early May.

Some of his less than stellar results this season can be chocked up to mechanical issues, like in Iowa and most recently on the Indy road course where he retired with a mechanical failure while leading the race.

Herta’s outlook on this season has shifted to next, but he is hopeful for the next tracks on the calendar.

“I think everywhere else I’ve been very comfortable with the car and very confident, but yeah, for one reason or another, we just can’t get a roll going,” continued Herta.

“I thought after Toronto we would get it going, then we had an issue in Iowa. We weren’t really incredibly fast in Iowa anyway.

“I’d like to just finish out the season and just be in the top five in every race and just get kind of get the ball rolling for what we need with no more issues and no problems and just finish off the year strong.”