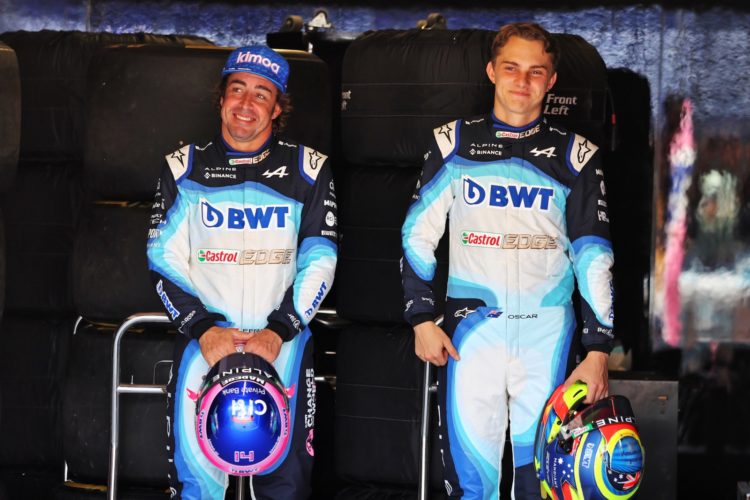 Formula 1’s silly season exploded into life on the opening day of the summer break and swiftly took a seismic turn. Motorsport Week breaks down how an astonishing situation unfolded, with Alpine losing an F1 legend and potentially a star of the future in successive days, and what could happen next.

Sebastian Vettel had been grappling with thoughts of retirement for some time but decided after the French Grand Prix that he was going to walk away at the end of 2022. He informed Aston Martin on the Wednesday prior to the Hungarian Grand Prix, made an announcement on Thursday, which consequently opened a vacancy at the team owned by Lawrence Stroll. Aston Martin had already scouted replacements as a back-up in the event of Vettel retiring, and swiftly zeroed in on Alonso, who in public emphasised that remaining at Alpine was his priority. However, he would not firmly commit to his present team, suggesting all open seats were a possibility, and that only three teams (Ferrari, Red Bull and Mercedes) could offer front-running machinery.

Alpine itself was still wrestling with its own conundrum. In 2021 it handed Esteban Ocon a three-year deal, taking one seat through 2024, meaning it was a case of two into one for Alonso and reserve Oscar Piastri, the reigning F2 champion, who had already accepted to spend 2022 on the bench. Alpine CEO Laurent Rossi had given an indication of the team’s intentions in France by suggesting it saw a future for Alonso in LMDh, where Alpine is due to debut in 2024. The implication was it wanted to hand Alonso, 41, a one-year extension with options thereafter to keep him in the Alpine family, while concluding a loan arrangement for Piastri to debut with Williams in 2023. That would have given Alpine the option to assess Alonso’s 2023 form – it cited the desire to evaluate matters annually due to Alonso’s advancing years – and give it the choice of Alonso or a trained-up Piastri for 2024.

Alonso, though, wanted a multi-year deal, adamant he is still operating at the top of his game, and indicating that he sees no reason not to be in F1 into his mid-40s. Aston Martin provided that long-term security and a deal was agreed, taking Alonso from the team currently fourth in the standings to one only ninth, but where money is not a limiting factor. Aston Martin is in a rocky shape, and needs work, though Alpine is not exactly competing for the front-running positions Alonso wants either.

The announcement of Alonso’s multi-year Aston Martin deal was made at 10am on Monday morning after the Hungarian Grand Prix. It caught everyone in Formula 1 by surprise, including Alpine, which had departed Budapest expecting to continue negotiations with Alonso into the summer break. The first Alpine knew of Alonso’s intentions was when the email from Aston Martin landed. That scuppered its plans but it believed it had the fall-back option of its protégé Piastri. However, nothing was forthcoming through Monday.

On Tuesday morning Alpine Team Principal Otmar Szafnauer, who left Aston Martin in early 2022 amid belief his responsibilities were being reduced, provided a very open interview to select journalists. As quoted by the BBC, he said he hadn’t spoken to Alonso – who he claimed was on a Greek island – and could not get hold of Piastri’s manager Mark Webber, while stating he didn’t know the intentions of Piastri’s camp. Szafnauer nonetheless outlined that there shouldn’t be any complications with Piastri.

Later the same day Alpine formally announced Piastri as its 2023 race driver – but there were sufficient warning signs that something was amiss. The announcement was delivered at 17:11 UK time, which was unusual, as major developments such as this are typically made on the hour. Furthermore, that was 02:11 in Piastri’s native Melbourne, which is hardly the ideal time at which to reveal such news. The wording of Alpine’s press release was also pointed. It commented that ‘in line with commitments made to the young Australian’ he would race alongside Ocon. Alpine also highlighted the fact that Piastri has had an extensive testing programme in Alpine’s ‘race-winning’ 2021 car, which has included running at Austin and Losail, ‘under the team’s guidance and full financial support’.

There was also a glaring omission: a quote from Piastri. Furthermore, while hardly the most prolific user of social media, Piastri made no mention of the news on his own accounts, or on his website. Considering, in theory, it was the biggest news of his career, and the realisation of a lifelong dream, and is ordinarily lauded across various channels with well-timed posts and in-depth videos, the silence was deafening.

Within a couple of hours of Alpine’s press release filtering through there was an update from Piastri.

“I understand that, without my agreement, Alpine F1 have put out a press release late this afternoon that I am driving for them next year,” wrote Piastri. “This is wrong and I have not signed a contract with Alpine for 2023. I will not be driving for Alpine next year.”

The message itself was an emphatic dismissal towards an organisation that has supported his career since 2019, and which was lining him up as its long-term prospect, from a driver who ordinarily cuts a low-key and relaxed figure. It was also an extraordinarily bold assertion from a driver who, while holding a plethora of junior titles, has yet to even participate in a Formula 1 practice session.

Alpine had publicly outlined its stance that it holds an option on Piastri’s services for 2023. Piastri, clearly, felt this was not the case.

Around the same time Alonso posted an Instagram Story, clearly showing himself in home town Oviedo (not a Greek island), with a grin and a thumbs up to the camera. Draw your own conclusions on that.

If Piastri was turning down Alpine, and had already snubbed Williams when the belief was Alpine was going to keep Alonso for 2023 and could presumably not even offer the Australian the promise of a 2024 ride either, it meant there was a better solution on the table. That solution is understood to lie at Alpine’s close on-track opponent McLaren.

McLaren Racing itself has been involved in a swathe of drivers of late, testing Colton Herta, while recruiting Alex Palou – partly enticed by the offer of a TPC programme – who in the process sparked an ongoing legal tussle with his present employers, the Ganassi IndyCar team. McLaren has Lando Norris signed up through 2025 and it linked up with Daniel Ricciardo for 2021 on a three-year deal. In public, Ricciardo has emphasised he will see out the deal, and spoke movingly from the heart in France over his desire to extricate himself from his current rut. He has only 19 points this year to the 76 accrued by Norris. McLaren’s management have been supportive in public, with Team Principal Andreas Seidl affirming Ricciardo’s place for 2023, but his reputation has taken a significant blow across the past 18 months. The latest development will not aid matters.

McLaren is also not entirely new territory for Piastri. While he is officially Alpine’s reserve, and they have first dibs, Piastri has also had a reserve arrangement with McLaren in 2022. That led to a seat fitting while he was placed on standby on a couple of occasions, in Bahrain (when Ricciardo ultimately recovered from Covid-19) and in Monaco (after Norris’ bout of tonsilitis during the preceding race and build-up). Seidl, meanwhile, was team boss at Porsche’s LMP1 team when Webber raced for the marque.

The other knock-on effect is at Williams, which now has a vacancy alongside the newly-retained Alexander Albon, having been open to the notion of Piastri joining the Anglo-Thai for 2023.

This is the million (or several of them) dollar question. There is a chance that relationships can be repaired – Formula 1 has had seemingly toxic partnerships that have cooled and developed positively in the past – if it suits the respective parties. Piastri may realise his prospects are best served at Alpine, Ricciardo could opt to see out his McLaren deal, and the whole unedifying saga may be quickly forgotten. Alternatively, Ricciardo may feel his time at McLaren is cooked, opening the path for Piastri, and potentially reuniting with a team he competed in 2019/20. Another outcome is that a financial settlement is reached between the respective parties, if Alpine does indeed have a valid contractual claim on Piastri, while accepting it cannot force itself on a driver who wishes out.

There is also the prospect that any one of the following could complicate such an approach: Ricciardo digs his heels in and refutes any settlement; Alpine’s desire to run Piastri is steadfast and unwavering; Alpine does not want Ricciardo’s services anyway. If there is no settlement then there would be the rare use of the FIA’s Contract Recognition Board. The CRB is made up of independent lawyers who will determine the legality of the specific contracts and conclude who is in the right: Alpine, or Piastri (or even McLaren). It was most famously used in 2004, when Jenson Button attempted to move to Williams for 2005, only for the CRB to rule in favour of his BAR-Honda team, where he remained. The Vice President of Honda Racing Development during that saga? None other than Szafnauer.