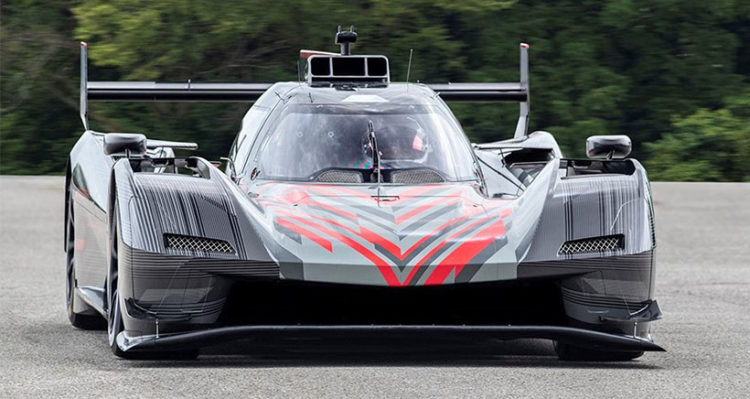 The Cadillac LMDh has completed its first rollout, with Earl Bamber at the wheel of the new-for-2023 prototype.

The car has a 5.5 litre, V8 engine, newly developed for the as yet unnamed car. Based on the Dallara P217, which its predecessor, the Cadillac DPi-V.R. was also built around, it currently looks quite different to the concept the American manufacturer released last month, just before the 24 Hours of Le Mans.

Specifically, the car has a flatter nose, wing mirrors, and a boxier, bigger air intake scoop, split into three parts. It also has no fins on the side.

The car will race in the IMSA WeatherTech Sportscar Championship’s new GTP class next year, alongside competition from Acura, Porsche, and BMW. It will also race in the FIA World Endurance Championship’s Hypercar category, making use of the convergence of the two rulesets, LMh and LMDh.

“It was an exhilarating feeling to jump in the car for the first time and get a sense of what the future will look like. So much work has gone into the 2023 race car, and I can’t wait to see it take flight next season.”

Meanwhile, Laura Wontrop Kauser, sports car racing program manager at General Motors, Cadillac’s parent company, commented: “The first laps are the start of an aggressive testing schedule ahead of next year. Our team is dedicated to continuing Cadillac Racing’s rich heritage of winning on the track.”