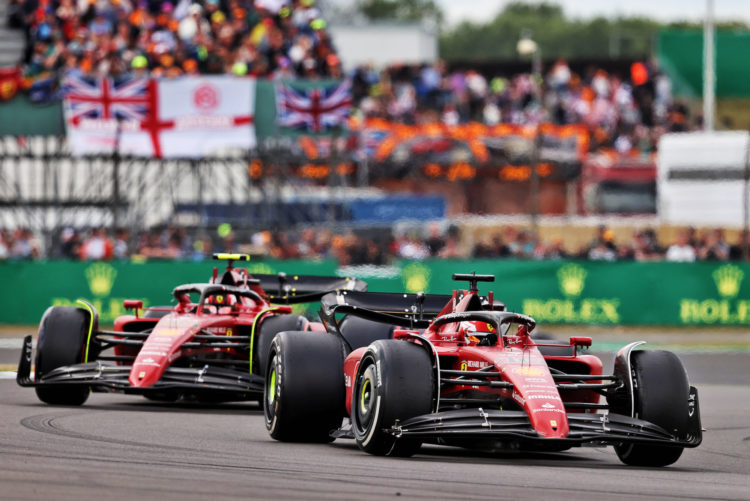 Ferrari was on course for a 1-2 finish at the British Grand Prix, before a late Safety Car enabled Carlos Sainz to swoop ahead of team-mate Charles Leclerc on fresh tyres for the win.

Leclerc was shuffled off the podium, leaving Ferrari with the jubilation of a grand prix win but also the sourness of missing out on an even better team result, with Leclerc’s own title aspirations taking another blow.

There were several moments in which Ferrari’s decision-making was understandably queried by observers.

During the first stint, following the removal of brief leader Max Verstappen from contention due to floor damage, Leclerc was able to live with – and perhaps be held up by – Sainz despite suffering front wing damage. With Mercedes’ Lewis Hamilton catching both of them and Leclerc pleading over the radio to be let through, Ferrari waited several laps before making a call.

It pitted Sainz from the lead, before Leclerc followed him in a few laps later. Hamilton stayed out in front, and once again Leclerc closed up to the back of Sainz. The Spaniard wasn’t effectively closing the gap to Hamilton, and several laps after Leclerc’s pit stop, Ferrari finally made the team radio call to swap cars.

“Earlier in the race we were leading with both cars,” Ferrari team boss Mattia Binotto explained. “Charles had a bit more pace, Carlos started having degradation on his tyres, which is why we pitted him earlier to Charles and we left him [Leclerc] out. But we were always monitoring the gap to Hamilton, and whenever Hamilton was coming in it would have been behind us, and that is exactly what happened.

“So we had the right pace on Hard tyres with our two drivers, we kept monitoring it, and when we saw it was marginal we simply asked to swap the cars. We swapped the cars because we saw, believed and I think we were right, that Charles had some more pace and it would have been the case that by getting Charles ahead, Carlos would be in the slipstream and DRS and could up his pace somehow.

However, Leclerc lost valuable seconds that could have proved beneficial later in the race when the Safety Car was deployed due to Esteban Ocon’s Alpine suffering a fuel pump failure. Binotto was critical of Ocon and his decision to park his car along the old start-finish straight, believing he had enough time to pull off the track as to not disrupt the race.

“We were clearly leading the race and it is obviously disappointing for Charles with the Safety Car at the end with Ocon stopping in the middle of the track,” he said. “I think he could have stopped somewhere else, because there was time to stop somewhere else, but he stopped there.”

At that stage Leclerc had extended his lead over Sainz – who had been told to fuel-save – to 3.5 seconds, with Hamilton six seconds down on the leader, albeit on fresher Hard tyres, having relinquished a couple of seconds with a slow stop.

It was at this moment that Leclerc’s race unravelled while Sainz was gifted an unexpected opportunity.

Ferrari kept Leclerc out on the track, but decided to stop Sainz for a fresh set of tyres. Due to the time gaps Ferrari feared relinquishing Sainz’s position to Hamilton had they opted to double stack the drivers.

But perhaps if Ferrari had made the call to swap the cars at an earlier stage, a more comfortable gap may have existed between Leclerc and Sainz to allow the team to pit both under the Safety Car. And given Ferrari’s slight pace advantage there was every chance Sainz could have re-passed any position ceded to Hamilton after the restart.

“What happened was, our two cars were too close to stop both of them, so we had to take a decision,” Binotto said. “We were the only one with two cars fighting for a good position, the other teams had one car and certainly [at other teams] the decisions are a lot easier. In our case we had the two cars and there was not a sufficient gap to stop both of them because the second would have lost time at the pit stop and fallen back.”

Although it left Leclerc on the track with old tyres, Ferrari remained hopeful that the Monegasque driver would be able to secure victory, despite having less favourable Pirelli rubber compared to his rivals behind. However, on a rubbered-in track on low fuel the Soft tyre performed strongly in comparison to old Hards.

“And Carlos, by stopping and still being second, he would have stopped the others, at least in the first couple of corners when we knew starting on the Hard would be the most difficult. So that was the reason we decided. And then we were hoping for more tyre degradation on the Soft to give Charles maybe a difficult three or four laps initially but recovering later on, but the Soft didn’t degrade as we were hoping.”

Ferrari also made a call to Sainz over the team radio to create a gap to Leclerc before the restart in an effort to ensure victory for the team and Leclerc. But Sainz, who was sizing up his first win in F1, made no hesitation to shut down the plan.

Binotto says he understands Sainz’s refusal to follow the orders

“We got to trust and let him do the best he can do for the team, and himself certainly, but for the team. And I think he proved the few laps before with swapping with no discussion. And even when stopping in the first pit stops earlier, compared to Charles, he had no discussion because he trusts in the team and the way he is behaving. So I am very happy. He did his best and there was no way probably to give the race to Charles.”

Although it did so marginally, Ferrari gained on Red Bull in the Constructors’ Championship – but on a weekend where things didn’t quite go right for the standings leaders, Ferrari will be disappointed it failed to maximise its result.