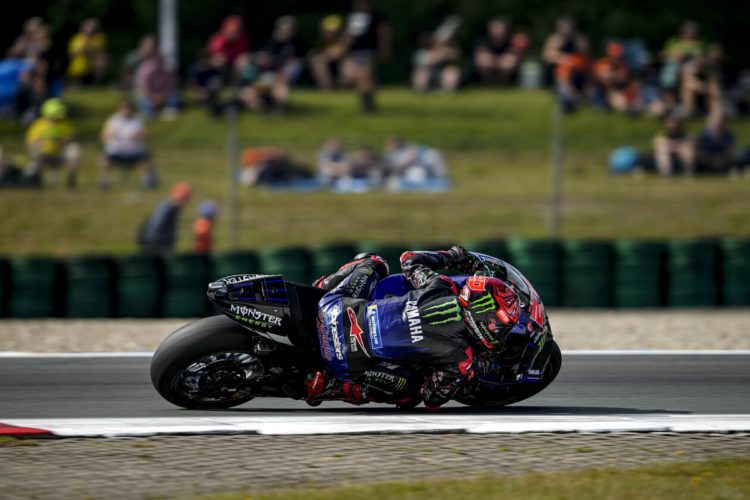 Yamaha MotoGP Managing Director Lin Jarvis took aim at the supposed “inequality” of the series’ stewarding panel after Fabio Quartararo was awarded a long-lap penalty for the British Grand Prix.

The Japanese manufacturer released a statement on Tuesday afternoon following the Dutch TT that explained Jarvis’ discontent with the decision to penalise the points leader for his part in a clash with Aprilia’s Aleix Espargaro in the early laps of the Assen sprint, in which Quartararo made an overambitious dive on the Spaniard into the tight Turn 5 – resulting in both visiting the gravel.

With Espargaro eventually recovering to fourth and Quartararo retiring from the encounter following a second crash at the bend later on thanks to a broken traction control sensor, the Frenchman was subsequently given a long-lap punishment to be taken in the British GP at Silverstone in five weeks time.

This drew the ire of Quartararo, who released a sarcastic Twitter post shortly before the Japanese marque’s own statement congratulating the stewards “for the amazing job you are doing”, with Yamaha team boss Jarvis now adding fuel to the fire by accusing the MotoGP stewarding panel of making decisions that have the value of “inequality.”

“Fabio Quartararo, the Monster Energy Yamaha MotoGP Team, and Yamaha have always striven for fairness and sportsmanship in MotoGP,” began Yamaha’s brief statement on the matter.

“We are disappointed to see the inequality with which penalties are applied by the FIM MotoGP Stewards panel.”

“We wanted to appeal the decision of the Stewards on Sunday at the Assen track, but this type of penalty is not open to discussion or appeal.

“We then wanted to raise the issue, as a matter of principle, with CAS (Court of Arbitration of Sport), but equally such a matter is not open to appeal.

“It is precisely for these reasons that correct, balanced, and consistent decisions should be taken by the Stewards in the first place and executed within the correct, reasonable time frame.”

The release went on to outline two reasons why it believes the penalty to be unjust, firstly due to its belief the result was a racing incident – citing Quartararo’s “reputation of being a clean rider” as backup to this claim – and second that it believes Espargaro’s race wasn’t as badly affected as victims in previous clashes seen in the series that ultimately went unpunished.

The most notable of these was Takaaki Nakagami’s nasty Turn 1 crash in the Catalan GP earlier this month, in which the LCR Honda rider missed his braking point and took out Ducati’s Francesco Bagnaia as well as Suzuki’s Alex Rins – the latter sustaining a broken wrist as a result of the smash.