Quartararo: ‘I just made a rookie mistake’ 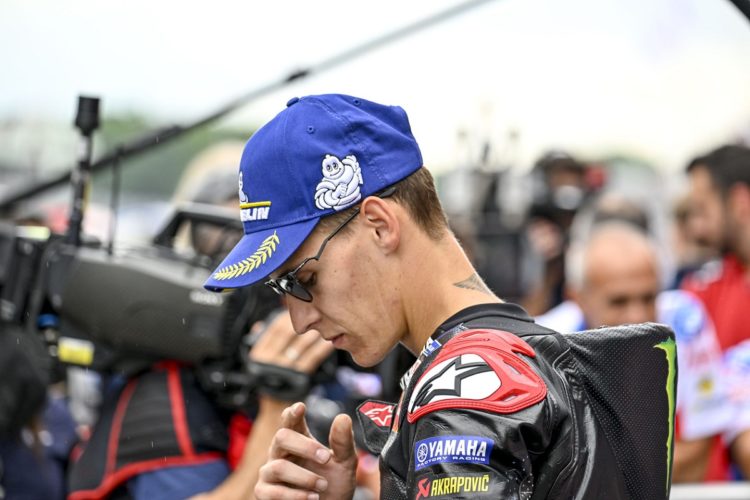 Fabio Quartararo has conceded he made a “rookie mistake” after clashing with Aleix Espargaro in the opening laps of the Dutch TT MotoGP contest at Assen.

The factory Yamaha rider suffered his first non-score of his title-defending campaign as a consequence of the Turn 5 crash, which materialised as Quartararo lost the front of his M1 after trying to dive down the inside of the Aprilia rider at the slow left-hander to snatch second on lap five.

While Espargaro was able to escape the gravel and put on a stunning recovery charge to finish fourth, Quartararo lost the aerodynamic wings from the front left of his Yamaha and struggled for pace thereafter, while a suspected issue with his traction control caused him to crash for the second time at the bend later in the race having already visited the pits.

The Frenchman admitted post-race that he had made a “rookie mistake” and apologised to Espargaro and Aprilia for the clash, adding he “needs to learn” from his error if he is to continue on the path to a second MotoGP riders title – a quest that sees him head into the summer break 21 markers clear of Espargaro.

“I just made a rookie mistake and I will have to learn from this one, of course I apologise to Aprilia and Aleix (Espargaro) for bringing them to the gravel,” said a remorseful Quartararo.

“Unfortunately we made a bad race but it is what it is, we have to learn for the second part of the season.

“I’ve always said the championship is never finished until the last race, it is of course not mine and I don’t have 250 points of advantage and doing these stupid mistakes is where you lose the championship, so I need to learn.”

Quartararo was critical with his Yamaha team for sending him back out on track after he felt something was amiss with his prototype, stating he “didn’t see the sense of going out again” though revealed he had luckily escaped serious injury following his nasty high-side that was the final nail in the coffin for his Dutch TT participation.

“The second crash was for sure not my mistake, there was something not working on the bike because that’s why I stopped, but the team told me to push even though I was already a lap down, so I didn’t see the sense of going out again,” continued Quartararo.

“The team told me to go back out to see if it was raining, but I came in because I had a problem with one of the sensors on the bike so we went back out and then I had another crash so nothing more to say.

“My shoulder is a little bit sore, but everything else is OK.”