Bagnaia: ‘I was terrified to crash again’ 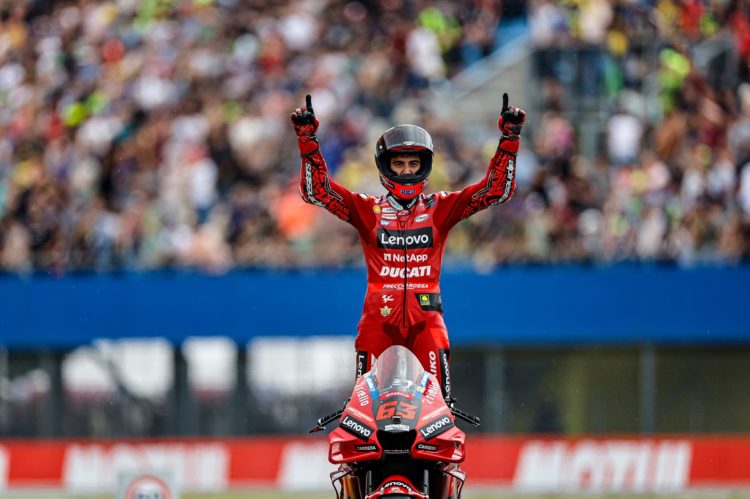 Dutch TT victor Francesco Bagnaia has admitted that he was “terrified” of suffering his third successive MotoGP DNF at Assen after rain started to fall mid-way through the contest.

The factory Ducati pilot led the Dutch TT from start to finish after bagging his fourth pole of the year on Saturday, though despite pre-race favourites Fabio Quartararo and Aleix Espargaro being ruled out of contention by an early clash he was forced to hold off rapid rookie Marco Bezzecchi, who ended up taking the chequered flag just 0.444s adrift of his countryman.

Bagnaia was forced to keep his head though after light rain began to fall on the Assen venue at around mid-distance, the Italian being made to keep pushing as Bezzecchi tried to take advantage of the situation to challenge for a maiden success, though luckily for Bagnaia the rain quickly eased and the track remained dry.

The 2021 MotoGP vice-champion described the moment he realised the precipitation had arrived as “scary”, adding that he was “terrified” of recording another non-score having crashed from both the last two events in Barcelona and Germany respectively.

“I’m very happy after this, the past two races we’ve had a bit of bad luck – more the first than the second – but it’s great to have this victory before the summer break, not just for me but also my team,” explained Bagnaia.

“It was scary (rain drops falling), I looked at the big screen just one time and I saw Aleix (Espargaro) in the gravel and a blue bike that I imagined was Fabio (Quartararo) so we got a bit lucky for that.

“When I saw this I slowed down a bit, but then Bezzecchi was pushing so it was difficult and I was terrified to crash again as the main thing was to finish the race so it wasn’t easy.

“I tried to be smart and not push too hard, and luckily everything ended well.”

“I’m very happy for him (Bezzecchi) and for the VR46 team because they are doing a really great job, Bez is a really great rider and is one of my best friends so being on the podium with my mate is great and I would like to enjoy this with him tonight.”