Bagnaia dominates Assen ahead of Bezzecchi as Quartararo crashes 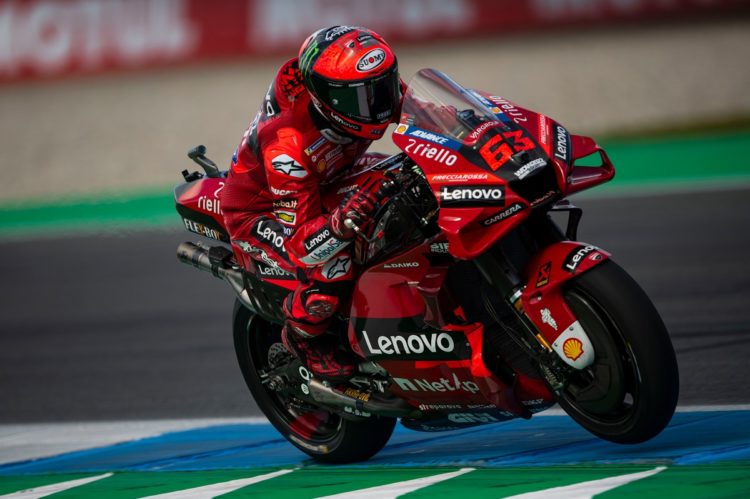 Francesco Bagnaia eased to a commanding win at Assen in the Dutch TT, while series leader Fabio Quartararo suffered his first DNF of 2022 after crashing with Aleix Espargaro.

Bagnaia made a lightning getaway to lead the field into Turn 1 from pole, while Quartararo ran wide and dropped to third behind Aprilia’s Espargaro, who managed to rise from fifth on the grid to second.

Quartararo was a man on the move though as he looked to enjoy a significant grip advantage over his title rival, the factory Yamaha man electing to dive down the inside of the Spaniard at Turn 5 just a few laps into the encounter as he looked to mount a bid for his third straight win.

Disaster awaited Quartararo though as he carried too much momentum into the bend, causing him to wash out wide and lose the front of his M1 – dragging himself as well as Espargaro into the gravel, dropping the latter to 15th as Quartararo later retired after crashing for a second time at the same corner while running last.

This left Bagnaia clear of VR46 rookie Marco Bezzecchi out in front, the factory Ducati ace controlling his advantage across the rest of the race to ultimately take the chequered flag 0.444s ahead of his countryman, who scored his first ever premier class rostrum result in classy style.

Maverick Vinales meanwhile managed to score his maiden podium for Aprilia after passing Pramac Ducati’s Jorge Martin late on, the nine-time MotoGP race winner forced to hold off a charging Jack Miller – who was staging a comeback following an early long-lap for irresponsible riding in practice –  over the final few laps.

His task was made easier after the Aussie ran wide at the final chicane trying to snatch third, setting up a titanic final lap tussle between the Ducati ace, KTM’s Brad Binder and the flying Espargaro.

Binder attempted to dive through on Miller at the final chicane, though Espargaro saw his chance and sent his Aprilia through on both – a move that allowed him to score a remarkable fourth just 2.5 seconds from victory having been well over eight adrift following his incident with Quartararo.

Binder therefore grabbed fifth ahead of a frustrated Miller, while Martin faded to seventh in the end.

Suzuki’s Joan Mir was eighth despite an early collision with Miguel Oliveira before the race even started – in which the two made contact as they lined up on the grid – the Portuguese rider following the 2020 MotoGP champion home in ninth ahead of the second GSX-RR of Alex Rins.

A long-lap for track limits saw Takaaki Nakagami drop back to 12th in the final reckoning ahead of Johann Zarco, who struggled for pace throughout the Dutch contest.

Espargaro’s miracle comeback means he narrows Quartararo’s points lead to 21 heading into the summer break, with Bagnaia’s success meaning he closes to within 66 of his 2021 rival having been 91 adrift heading into the weekend.