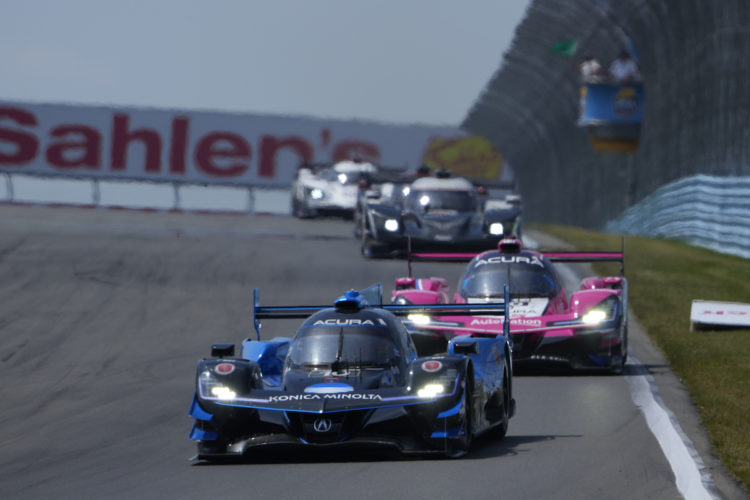 Filipe Albuquerque leads the overall and DPi field as we are under a Full Course Yellow for an accident involving the #13 AWA LMP3 car.

As we got restarted Olivier Pla made a move on Tristian Vautier whilst Ben Keating immediately got through Dennis Andersen due to only losing one position with the early stop he made.

Ben Barnicoat made a move on the McAleer Mercedes to bridge the gap onto the Pro Leaders and the Turner BMW of Robby Foley followed the Lexus through to take the GTD lead.

With 35mins gone Earl Bamber passed Bourdais and was being pressurised by Kobayashi until another Full Course Yellow was brought out by the #33 LMP3 machine making contact when making an opportunistic move on Jarett Andretti and span. At the same time, the LMP2 Dragonspeed machine also shed a wheel which prompted the first pitstop faze.

Blomqvist beat the Wayne Taylor Acura out with Bamber followed by Bourdais but the #48 dropped positions.

Steven Thomas was at the front in LMP2, Dan Goldburg took the lead in LMP3, and Ross Gunn managed to jump Connor De Phillippi to take 1st due to not pitting. At the top of GTD Robert Megennis was in front of Sernagiotto but hadn’t stopped as of the FCY coming out.

In LMP2 still under FCY, Steven Thomas and Ben Keating pitted at the same time and left side by side. As they came to the exit, Keating filed behind but saw the red light, unlike Thomas, who ran the light and re-joined the circuit.

The #13 AWA LMP3 got hit from behind by Jarett Andretti on the restart at the bus stop chicane which would immediately bring out another FCY.

Steven Thomas received a stop-go 60s penalty for running the red light but in another turn of events, Ben Keating got a drive-through penalty for passing under yellow flags. This left Dennis Andersen at the top of the class followed by Dwight Merriman.

With 1hr 20m gone the #6 LMP3 of Dillon Machavern had a spectacular engine blow-up coming through the S-bend which would bring out another FCY. The driver exited the car and was ok.

Another round of pit stops followed which moved Filipe Albuquerque to the front after electing not to pit but Tom Blomqvist is second with Earl Bamber third in class. Jimmie Johnson moved into fourth in the #48 car followed by Sebastien Bourdais.

With 5 minutes till the 2hr mark, the #13 AWA car has more bad luck as Lars Kern has a massive accident at the exit of turn one. The driver exited the car himself with a Full Course Yellow thrown.

As we reach the 2 hour mark, Filipe Albuquerque leads Blomqvist and Bourdais in DPi. Dylan Murray is at the front in LMP2 with Fabio Scherer behind. In LMP3 Josh Sarchet is in front of Kay Van Berlo and Nolan Siegel.

GTD Pro has Connor De Phillippi back at the front after Gunn’s pit stop. Ben Barnicoat and Jordan Taylor in the #3 Corvette round out the top three. Finally in GTD Richard Heistand leads in his Lexus followed by Michael Dinan in the #96 BMW with Robert Megennis in third.