Razgatlioglu: ‘Not so easy’ adapting to Yamaha MotoGP machine 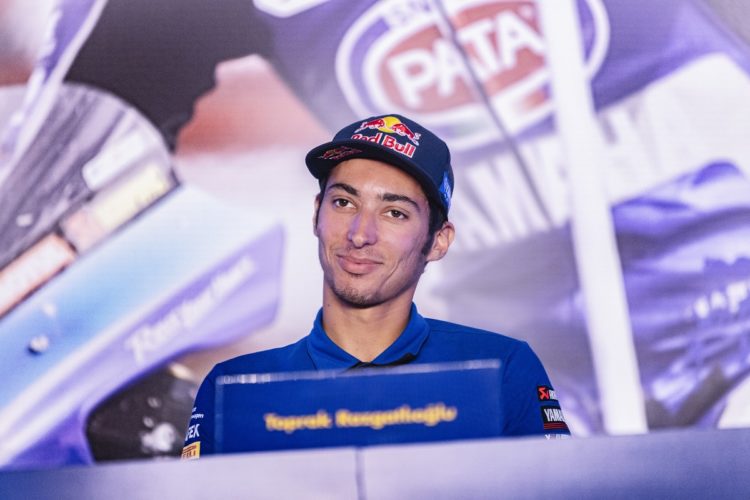 Yamaha superbike star Toprak Razgatlioglu admitted that he found it “not so easy” to adapt to one of the Japanese manufacturer’s MotoGP prototypes in a test at Aragon on Tuesday.

The factory Yamaha World Superbike pilot – who won last year’s riders title on one of the brands R1’s – was afforded a test on one of its MotoGP machines as a reward for his recent success, the outing his first chance to sample a premier class bike.

Razgatlioglu was joined by Yamaha MotoGP test rider Cal Crutchlow at the Motorland Aragon venue to help him acclimatise to the M1, the Turkish rider completing a total of 40 laps before a rain shower cut short his day in the afternoon.

The 18-time WSBK race winner described his test as “very positive”, admitting he found it “not so easy” to adapt to the M1 due to the significant differences between it and his R1, the extra power and fully-seamless gearbox providing a very different experience than his usually daily-rider.

“This was my first day on the Yamaha M1 MotoGP™ bike and it felt completely different to my R1 with more horsepower, different electronics, seamless gearbox, all of which is completely new for me,” explained Razgatlioglu.

“With every lap I learned more, because after WorldSBK it’s not so easy to adapt to the MotoGP™ machine.

“Fortunately, I had Cal Crutchlow on hand to offer advice and he was able to help me a lot. The bike feels good, especially on the straight where it’s very fast, and it was interesting to experience the carbon brakes.

“The conditions were really hot today, so we stuck to doing five or six lap runs only after the initial run of 12 laps to get a first feeling for the bike.

“When I watch the MotoGP™ bikes on television here at Aragon you can see it is a bit bumpy, and I can feel it here today.

“It’s not so bad, you have to keep the gas open to ride through the bumps, because if you close then it becomes more unstable.

“Overall, a very positive test, even if it was cut short by rain this afternoon, which meant I didn’t get quite as many laps in as I’d have liked.

“I really enjoyed riding the MotoGP™ bike, so many thanks to Yamaha for allowing me this opportunity.”

Razgatlioglu was rumoured to be looking at a future in MotoGP with Yamaha after taking last year’s WSBK title, though he was keen to only make the move should it be with the factory outfit as opposed to a satellite berth.

His chances were all but ended for the foreseeable future after Yamaha’s customer RNF Racing squad elected to switch to an Aprilia supply deal for 2023, leaving the manufacturer with just two entries on next season’s grid – both of which have the already-contracted Fabio Quartararo and Franco Morbidelli aboard them.