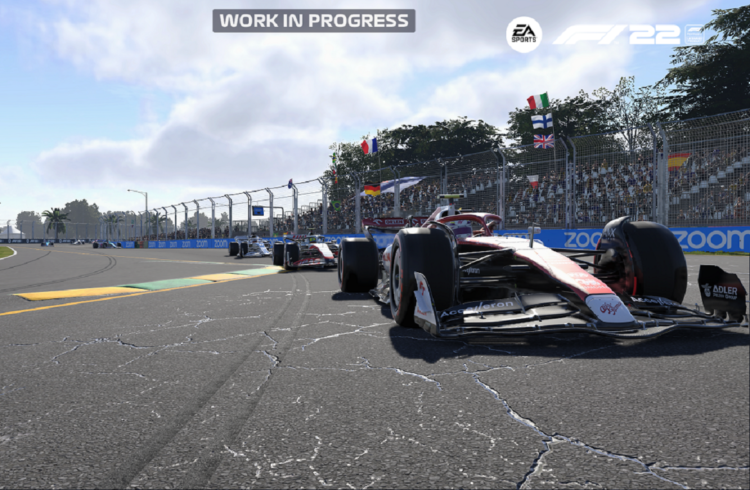 With EA/Codemasters’ latest Formula 1 game offering set to release in just over two weeks time on the 1st of July, Motorsport Week was given the chance to sample a preview version of the title in order to experience what’s what prior to the finished article being unleashed.

The official Formula 1 game franchise enters a new era in 2022 on multiple fronts, with the new revitalised rule-set the real life machines now follow making its way into the title – while this year’s entry also marks developer’s Codemasters first since being taken over by gaming giant Electronic Arts last year.

EA’s influence is immediately clear with the title being changed to a shorter format more akin to its immensely popular FIFA franchise, while the menu music in F1 22 morphs into the indie/electronic type music seen in FIFA relative to the moody, intense soundtrack heard in previous F1 games.

Highlighting the main changes for this year’s game – alongside native VR implementation for the first time – is the inclusion of the F1 Life feature, which allows you to decorate a form of studio apartment to your own tastes with different kinds of furnishing options such as sofas, wall art and a supercar of your choice to act as a centrepiece to your homespace.

Yep, you read that right, a total of seven supercars – across the four manufacturers that currently compete in F1 – now feature within the game, and yes they do feature as driveable vehicles rather than just outlets for decoration.

The F1 Life feature also allows other players from around the world to visit your space to critique or enjoy your unique sense of style, as well as look on in awe at your personal trophy cabinet filled with cups won throughout career mode.

The game features a total of 40 challenges featuring the cars that cover driving aspects such as drifting, time attacks as well as duels with an AI driver piloting the same machine.

These challenges can be seen as a spiritual successor to the F1 classic challenges seen in previous titles, with the supercar tests also being included throughout career mode as a form of break in between race weekends.

The decision to include these aspects to the official F1 game have proved polarising with fans of the franchise in the run-up to the release of the title, the fact that they come at the cost of the well-received Braking Point story mode featured within F1 2021, which saw players step into the shoes of rookie racer Aiden Jackson as he made his way through the F1 ranks, not helping matters.

The cars are actually pretty fun to hustle around even with the game not in currently in its fully-finished state, with each machine having a good feel of weight transfer, thus allowing you play with it at or over the limit while drifting or attacking the track to maximise laptime.

F1 22’s career mode will likely be the more populated game mode – especially in the long-term – though for this year’s edition it’s fair to say it’s a case of evolution rather than evolution, which isn’t necessarily a bad thing.

MyTeam – which allows you to create your own F1 team by signing up sponsors, choosing an engine supplier as well as a team-mate – returns with a vengeance alongside the conventional career mode that allows you to race as any of the official driver and teams involved in the 2022 F1 world championship.

Changes are restricted to small additions this year such as the new Adaptive AI setting – which slows or speeds up the AI to match the player skill level in real time – as well as the inclusion of immersive and broadcast styles for pit-stops, safety car periods and formation laps.

Immersive allows you to optimise your turn-in to a pit-stop to try and shave several more-crucial tenths from you pit time as well as angle your car how you want in your pit box at the start of a race, while broadcast enables you to sit back and allow the game to take care of things while you enjoy external camera angles that give you a view similar to that of a real F1 broadcast.

The driving model has also been enhanced with an all-new aerodynamic simulation in order to try and capture the behaviour of the new machines in the best way possible, the vehicles featuring significantly more understeer relative to F1 2021, while a light right foot (or finger) is needed with the extra wheelspin induced by the significantly lower grip at slower speeds.

In conclusion – from the unfinished build at least – F1 22 largely sticks to what has made the game successful over the past decade with the long-reaching and engaging career mode, good AI and fun driving mechanics.

While the title doesn’t offer a huge amount new – in terms of its F1-focussed content – relative to the previous entry in the series, the fact it features the all-new racers and updated roster – with more to come via planned DLC later on – is enough to offer F1 fans of all shapes and sizes a fun and immersive experience.