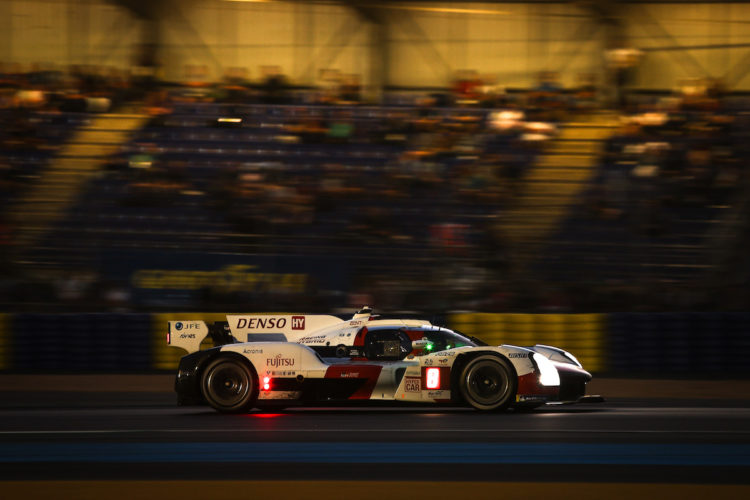 Toyota’s race-long 1-2 at the 24 Hours of Le Mans continues as the race enters its second half, with Ryo Hirakawa, in his first Le Mans, leads in the #8 Toyota GR010, just over 20 seconds ahead of countryman and teammate Kamui Kobayashi in the sister #8 Toyota.

#709 Glickenhaus 007 is third overall and in the LMH class, with Ryan Briscoe at the wheel. However, the car is 2 laps down on Hirakawa.

The other Glickenhaus, #708, currently with Pipo Derani at the wheel, is fourth in LMH but ninth overall, as it was delayed with crash damage after Olivier Pla span the car at Tertre Rouge on his outlap from the pits. The #36 Alpine A480 has been beset by multiple technical issues, with Andre Negrao 22nd overall.

The #38 JOTA Oreca 07-Gibson has led the entire race in LMP2, as Antonio Felix da Costa has over a lap lead to Louis Deletraz in the #9 Prema Oreca 07-Gibson. Third in class is Sean Galeal’s #31 WRT Oreca 07-Gibson, recovering after an incident at the start of the race, which dropped the pole-sitting car to the back of the LMP2 field.

In GTE-Pro, the battle between Porsche and Corvette continues. The #92 Porsche 911 RSR-19 leads with Kevin Estre behind the wheel, ahead of Nick Tandy in #64 Corvette C8.R, to the tune of 1 minute and 40 seconds. Third is James Calado in the #51 Ferrari 488 GTE Evo.

In GTE-Am, the #33 TF Sport Aston Martin Vantage AMR leads with Henrique Chaves. Second is #79 WeatherTech Porsche 911 RSR-19, which lost the lead after Cooper MacNeil had an off. In third is Martin Rump’s #99 Hardpoint Porsche 911 RSR-19.