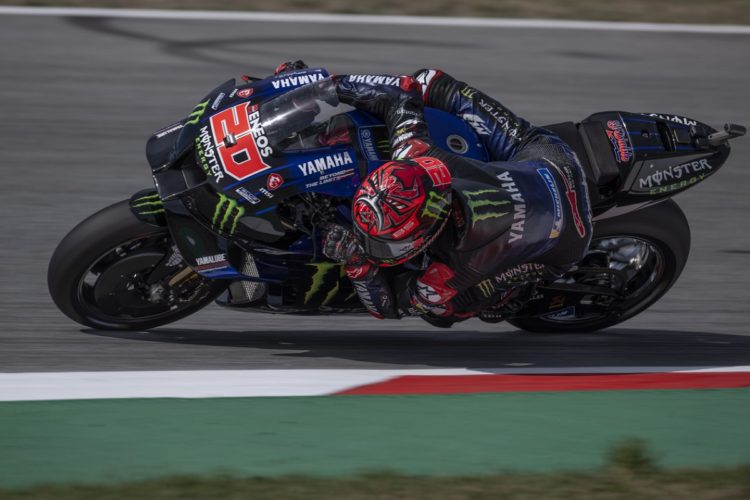 Fabio Quartararo cruised to a second MotoGP win of 2022 in commanding fashion at the Circuit de Barcelona Catalunya as Francesco Bagnaia was eliminated in a crash early on.

The Yamaha pilot got a lightning start from third to get alongside Bagnaia on the long run down to Turn 1 and subsequently outbrake not only the Italian, but pole-man Aleix Espargaro to move into the lead as the field exited Turn 1.

Not so lucky though was Bagnaia, who was collected from behind by a crashing Takaaki Nakagami after the LCR Honda rider lost the front of machine while trying to pass Pol Espargaro, the Japanese racer also collecting Alex Rins’ Suzuki in the process – leaving all three on the sidelines as a result.

Quartararo meanwhile quickly managed to establish a blistering pace out in front, the reigning premier class world champion crafting a 3.3 second lead by the time the race reached mid-distance, the Frenchman helped by a battle between Espargaro and Pramac Ducati’s Jorge Martin.

The Aprilia rider lost out to Martin early on before later moving into the runners-up spot half-way through the contest, though after seemingly starting to run into tyre trouble he once again slipped behind the Ducati as the race entered its climactic stages.

Quartararo ultimately continued to pull clear to the tune of 6.5 seconds by the time he took the chequered flag after 24 laps having preserved his rubber masterfully, while the battle for second remained hotly contested right until the end.

Espargaro eventually managed to once again get the better of Martin as he started to lose grip, though he would give away a fifth consecutive rostrum in bizarre fashion as he rolled off believing the race had ended a lap before the end, dropping to fifth by the time he realised his error.

This gifted Martin second – only his third top ten of the year so far – while the sister Pramac Desmosedici of Johann Zarco completed the rostrum after dropping back in the final couple of circulations.

Joan Mir snagged a strong fourth after charging through from 17th on the grid ahead of Espargaro, with Luca Marini enjoying his second straight sixth just clear of the second Aprilia of Maverick Vinales.

Brad Binder led home KTM team-mate Miguel Oliveira for eighth, while Alex Marquez battled from the back of the grid to complete the top ten despite having been diagnosed with a very mild concussion after his nasty FP4 shunt just a day prior.

Remy Gardner won the battle of the rookies with a late pass on RNF Yamaha’s Darryn Binder, the pair claiming 11th and 12th respectively ahead of the other factory Yamaha of Franco Morbidelli.

Gresini’s Enea Bastianini suffered his second DNF in as many races after crashing from seventh at Turn 5 around mid-distance, the Italian team’s weekend becoming a complete washout as Fabio Di Gianantonio crashed from tenth at Turn 13 just seconds later.

Quartararo’s success means his series lead now stands at 22 over Espargaro ahead of the German Grand Prix in two weeks time, with Bastianini remaining third overall but now a distant 53 markers adrift.