The spectacle has returned to the Indy 500 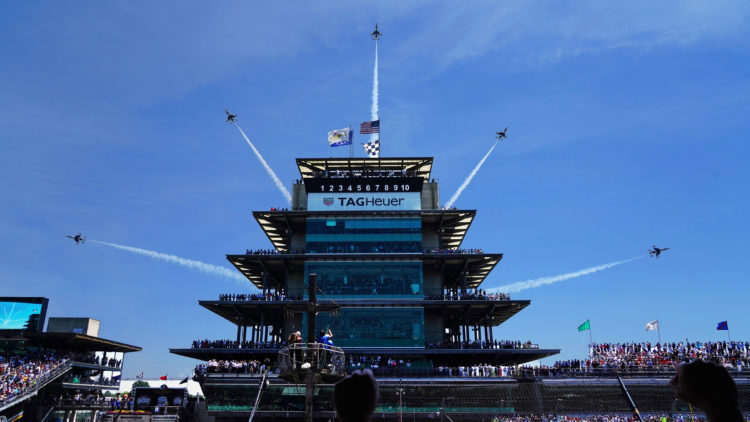 The US Air Force Thunderbirds flew over the speedway twice in the buildup to the Indy 500. All Photos: Kevin Dejewski

The 106th running of the Indianapolis 500 was more than just another event at the famed circuit, it was a return of the spectacle that has traditionally accompanied one of the biggest racing events in the world.

After two years at a limited capacity, the facility opened its doors to a full crowd and gave them plenty of memorable moments over the course of the weekend. Often referred to as ‘The Greatest Spectacle in Racing,’ the race truly lived up to its name this year.

Motorsport Week was in attendance to take in the sights, and brings you on a tour of all the experiences that can be found on race weekend at the Indy 500.

Among other things, 2022 saw the return of direct interactions between drivers and fans.  A full field autograph session was held on Saturday morning, and many thousands of enthusiastic fans turned out to get their favorite memorabilia signed by their favorite drivers.

Later that day, the drivers took part in a parade through Indianapolis for all the fans that weren’t able to make it to the track.  The entire city was involved in celebrating the historic event’s 106th running.

For those fans that crave entertainment outside of cars on track, there were plenty of options to keep them occupied all weekend.  Everything from a round of golf inside the 2.5-mile oval the Snake Pit concert stage that blasted music each night and even during the race.

The Corvette car corral was a treat of owners of the iconic brand, as they were allowed to take a lap around the track and park together in a designated lot in the infield.  The gathering of 100+ pristine Corvettes also provided eye candy for anybody walking past towards the fan zone.

Many considerations were made to provide talking points no matter where in the expansive facility fans found themselves.  There were multiple custom posters printed in the garage area for the all-important social media posts, as well as advertising displays disguised as photo-worthy installments.

In other parts of the track were hospitality paddocks that were assembled for a completely different type of clientele.  The large, invite only Arrow McLaren SP suite was impossible to miss with its humungous video board showing off the partnership’s biggest achievements.

Found near the driver’s bus lot, in which most drivers spend the entirety of the Month of May, was Zak Brown’s personal Ford Condor II motorhome.  The historic sight travels to most events that Brown attends, and serves as his unique mobile office.

Along with the return of the fans was the return of a few traditions that have become forever associated with the Indy 500.  The Gordon Pipers marching bagpipe band was in the infield the entirety of the weekend, and even led the Borg-Warner trophy out on the morning of the race.

The infield on race day was a spectacle all to itself simply on account of the number of people that packed in to catch a glimpse of their favorite cars being wheeled to the grid.  A lucky few even snagged a quick signature or selfie with one of the 33 drivers.

Once the race itself approached following a morning filled with festivities, the full extent of what it means to have a completely full house at the Indianapolis Motor Speedway was revealed.  The grid was packed with media and invited guests as endless pre-race activities were cycled through.

Then the stands filled in with 300,000 fans, and The Greatest Spectacle in Racing truly got underway.  There is nothing quite like the atmosphere surrounding the best-attended sporting event in the world, and it was on full display once again this year.